We’re starting to think he’s not the nicest guy around. 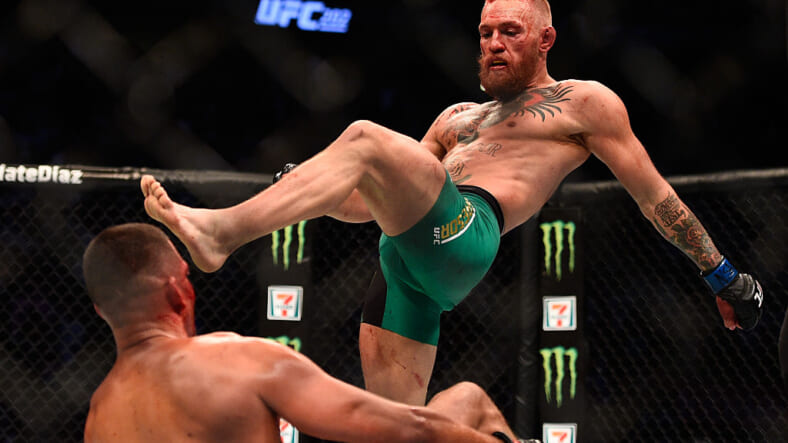 Conor McGregor, who’s apparently been relaxing since his boxing loss to Floyd Mayweather in August, has been watching other MMA fighters work. At the UFC event he attended Saturday in Poland, he made news without throwing a punch when he was caught on camera repeatedly calling one of the fighters a “faggot.”

MMA Fighting reports McGregor’s words were in reference to Andre Fili, who beat McGregor pal Artem Lobov. The site also reported videos that caught McGregor using the slur were initially posted on official UFC and related media accounts, only to be deleted later.

McGregor seemed to be feeling his oats as he watched the match from ringside as well according to Forbes:

Another person that felt McGregor’s presence was referee Marc Goddard. With less than a minute left in the second round of the featherweight bout, Goddard paused the action in the cage to address the lightweight champion, who had spent the previous nine minutes screaming encouragement to Lobov.
“What’s got into you, man?” Goddard asked McGregor from inside the cage. “C’mon. Sit down, please. Be a professional.”

MMA Fighting notes that using a word so offensive to the LGBTQ community is in contrast with past statements from the McGregor camp. The tweet below regarding Irish same-sex marriage legislation, for example.

Myself and my team are urging everyone to please VOTE YES TO EQUALITY! Every human deserves equal rights #WeAreAllOne pic.twitter.com/PbyTXNHzKQ

Social media reaction fell into predictable camps. There were the offended:

… And those who thought it was a lot of fuss over nothing—or evidence of so-called “PC culture” in overdrive.

Thing about McGregor sayin 'Faggot' is ridiculous,I know he shouldn't be saying it but it's a turn of phrase here not meant to be homophobic

McGregor called someone a faggot, who gives a fuck? The world has gone mad

It’s ironic that McGregor was caught saying the word, given that in the run up to their boxing match, Floyd Mayweather used the same slur against him and was thoroughly trashed on social media as a result.

For his part, Mayweather apologized for his words, saying that there are “boundaries you just don’t cross.”

But he’s never been particularly predictable, either.