At least this fight will be remotely competitive… 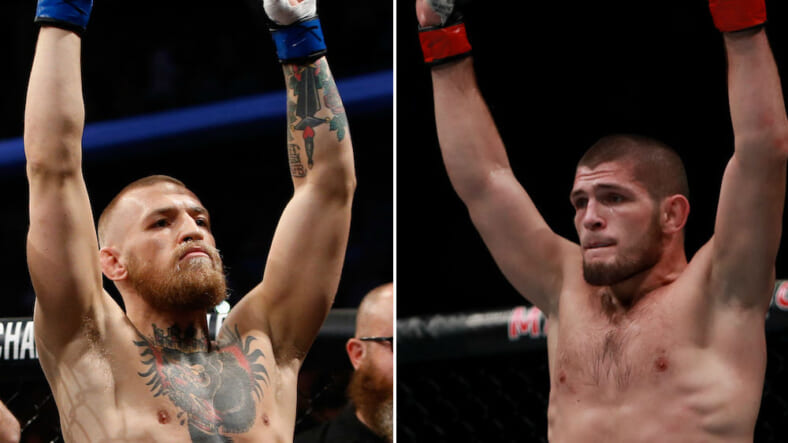 Conor McGregor’s next fight may be in the boxing ring, but that doesn’t mean he’s leaving behind the Octagon for good. In fact, after Floyd Mayweather makes him look silly in August, McGregor wants to return to the cage to defend his lightweight crown against undefeated Russian brawler Khabib Nurmagomedov.

“You know what Conor told me? He said, ‘I want Khabib in Russia,’” UFC kingpin Dana White told MMAjunkie Wednesday. “Isn’t he fucking awesome? He’s like, ‘I want Khabib, in Russia.’ He’s awesome. Conor McGregor is a fucking unicorn. There’s nothing like him. He’s working on boxing Floyd Mayweather and then he’s talking about fighting Khabib in Russia right after.”

If McGregor and Nurmagomedov do hook up in Russia, it will be the UFC’s first fight in the country, where MMA is exploding in popularity. It would also be McGregor’s first defense of the lightweight title, which he took off of Eddie Alvarez last November.

Before the fight happens though, White wants Nurmagomedov to finally get in the cage with Tony Ferguson. That fight has been postponed three times already, most recently in March when the pair was supposed to meet at UFC 209. Nurmagomedov pulled out of that fight days before it happened after a weight cut that he says almost killed him.

By asking White to book him against Nurmagomedov next, McGregor seems to be saying that the 24-0 fighter will remain undefeated once he does fight Ferguson. A 25-0 Nurmagomedov fighting McGregor in his homeland would make for one hell of a return to the Octagon for the UFC’s biggest star.

But before McGregor thinks too much about planning his next move, he might want to focus a bit on the boxing legend he’s about to run up against. As Mayweather himself says the caption to this video, he may not be the boxer he used to be, but he’s still a “legend.”