Dude is ready to FIGHT. 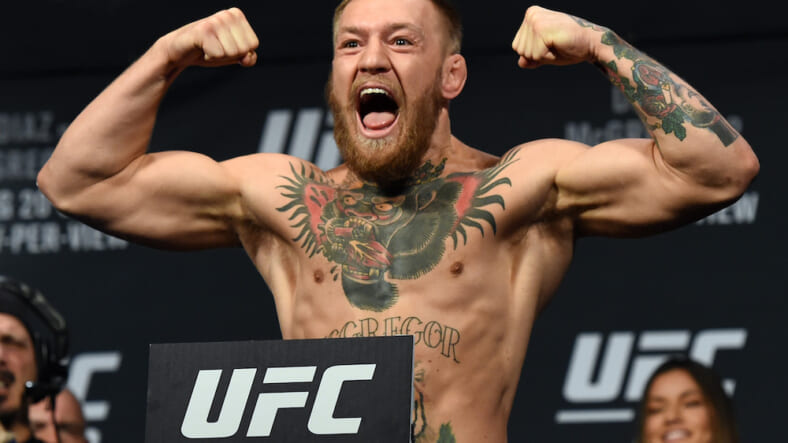 With only a few days remaining until the first boxing match of his career, Conor McGregor is ready to start throwing punches. The UFC superstar is in Las Vegas ahead of Saturday’s fight and he’s nearly come to blows at least three times that were caught on video.

There was the confrontation with Paulie Malignaggi, the retired boxer and short-lived McGregor sparring partner. Malignaggi quit working with McGregor after the Irishman’s camp leaked pictures of him appearing to kick the shit out of Malignaggi in a sparring session.

“I actually beat his ass,” Malignaggi claimed in response to the photos. On Tuesday, he confronted McGregor in Las Vegas, repeatedly telling him “bring his balls” to the fight on Saturday. “You got your ass whooped,” McGregor shot back.

McGregor also had a brief run-in with Mayweather’s crew outside T-Mobile Arena. As McGregor’s team arrived, Mayweather’s was departing. They crossed paths and, naturally, there was some cursing, pushing and macho posturing.

McGregor and members of his team clash with Mayweather entourage at grand arrivals pic.twitter.com/OxCKARsbUf

McGregor explained that the confrontation was over a cancelled face-off.

It wasn’t just the pros who McGregor was getting testy with either. He nearly had a run in with a heckler who repeatedly told McGregor, “You’s a bitch.”

Another one. Conor McGregor is ready to fight. Floyd, Paulie, this guy. You. Me. All of us. pic.twitter.com/s2UgegqrUD

McGregor is clearly ready to fight. What he’s not ready to do is predict when this fight will end.

“I believe I am going to knock him down in the first round because be sure I am going to start fast,” he said. “After that, maybe I will toy with him for two or three rounds and it’s possible the referee will have to step in and stop it.”

Mayweather, on the other hand, doesn’t believe he’ll need the help ending this fight from the referee or the ringside judges.

“The fight is not going the distance, no matter what he says. He’s getting knocked out,” Mayweather said.