It’s as understated as the Irish UFC badass himself. 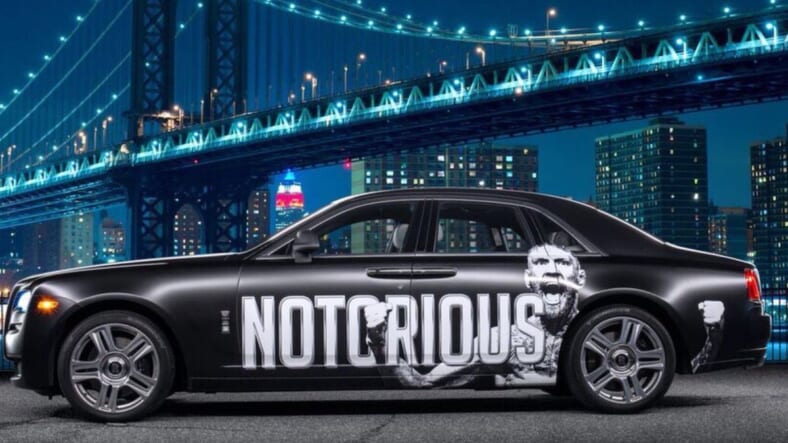 UFC superstar Conor McGregor is rolling around New York City this week before Saturday’s title bout with Eddie Alvarez in UFC 205 in typically flamboyant style. The Irish wild man is cruising the Big Apple in a $350,000 matte black Rolls-Royce Ghost plastered with his “Notorious” nickname in two-foot-high lettering along with Fathead-sized pictures of himself. And we’ve got the pictures to prove it:

McGregor captioned his tweet posing with the car “I am the King of everything”, as one does.

Rolls-Royce is letting @TheNotoriousMMA use this Ghost model ($350,000) this week leading up to Saturday night's UFC fight in New York pic.twitter.com/S5zm0L5z0R

The garishly McGregor-branded Ghost is a gracious five-seater, propelled by a 563-horsepower V12 engine capable of vaulting the champ and his friends to 60 mph in 4.8 seconds, and to a top speed of 155 mph, depending on crosstown traffic in Manhattan.

The wheels are bling-worthy dubs, at 20 inches apiece, so McGregor won’t be embarrassed when he valets the borrowed Ghost at Madison Square Garden for the historic fight, the first UFC fight ever to be held at the famed arena. Not a bad way to roll up to MSG to defend your belt, we’d say.