The UFC announced the trilogy fight was taking place in Las Vegas at full capacity. 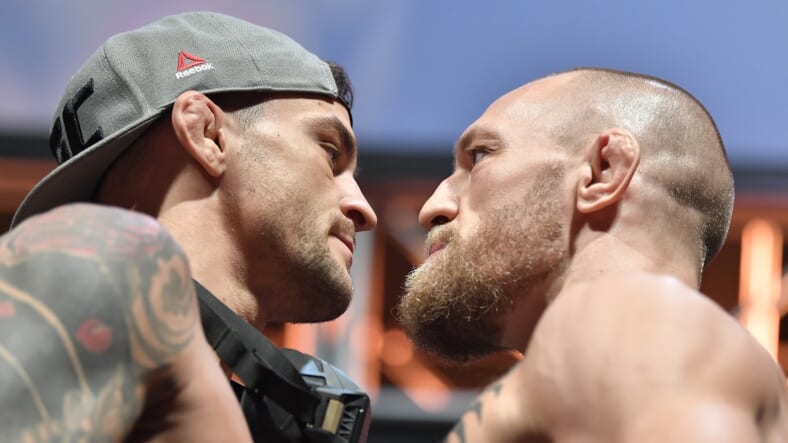 Dustin Poirier called out Conor McGregor on Twitter over a donation the MMA superstar once said he’d give to Poirier’s The Good Fight Foundation charity. McGregor never paid and admitted as much. However, Poirier may have lost a chance to complete his tied-up fight trilogy with The Notorious One, as McGregor tweeted early Monday that he will “fight someone else” at UFC 264 “on the 10th.”

The back story: When the two lightweight fighters were doing press for UFC 257, the match where Poirier flattened the Irishman–virtually assuring a third go-around–McGregor said he would give $500,000 to The Good Fight Foundation, a legit and registered 501(c)(3) Louisiana nonprofit serving the state’s underprivileged youth.

In fact, McGregor publicly claimed he’d pony up the half-million several times, but Poirier, in responding to a previous tweet from McGregor bragging about how the match would go for him this time, let it be known that didn’t happen.

That's a fun prediction! @TheNotoriousMMA you also predicted a donation to my foundation and you and your team stopped responding after the fight in January.
See you soon.
July 10th Paid In Full!

McGregor fired back, basically saying their people had been in touch regarding the charity but that he didn’t give out donations unless he knew exactly where they were going. That led to this exchange.

My team does their due diligence to make sure every donation meets the mark. My generosity is known. You will pay with your brain for this attempt at smearing my name. Shooting ass shelling ass bitch. Little bitch kicks from a shell. Good luck when you’re caught. You’re fucked.

McGregor was clearly feeling like Poirier was smearing him in a way that was out-of-bounds for the UFC and that was when he posted the tweet ending with “The fight is off btw. I’m going to fight someone else on the 10th. Good luck on your old contract kid.”

Poirier came right back with one word, “Ok,” and a short video clip of the end of their second match, in which he literally pounded McGregor to the mat.

TMZ noted that despite what McGregor wrote in his tweets, “the UFC posted an article about Dustin’s charity back in January, spelling out how donations have been used over the years.”

In that article, UFC writer Gavin Porter dropped this list of contributions from The Good Fight in 2020 alone:

UFC 264 is still set to happen on July 10, 2021 in Las Vegas at full capacity, said UFC boss Dana White in a Twitter video after McGregor’s outburst.

The series between McGregor and Poirier currently stands at 1-1. McGregor scored a first-round knockout over Poirier when they were both featherweights in 2014, but Poirier avenged that loss in their rematch in January.