The Notorious One wields a mean can of Monster. 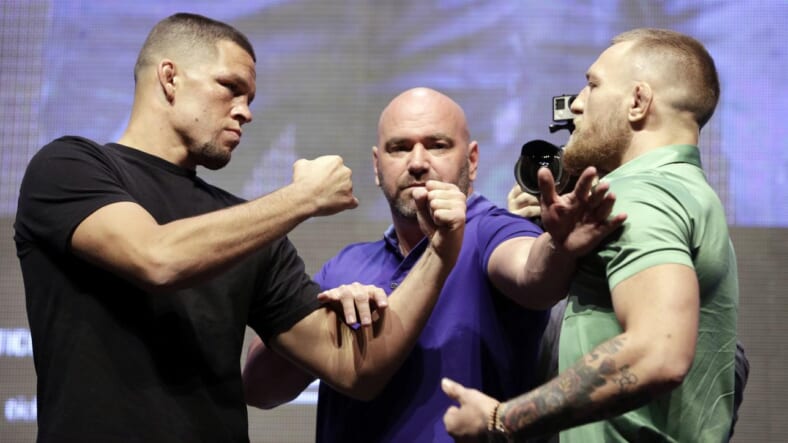 Conor McGregor can be relied on for some real theater surrounding his big matches. Even his ridiculous press conferences prior to his boxing match with Floyd Mayweather, however, weren’t as dramatic as one prior to the McGregor-Diaz rematch.

That event dissolved into a bottle-throwing free-for-all. Now it appears as though McGregor might have to pay for his shenanigans.

The Blast reports security guard William Pegg was at the presser and has filed suit against the UFC star, asking for what amounts to walking around money for McGregor these days.

In his lawsuit, Pegg claims he was hit in the back by the [Monster Energy drink] can, near his left shoulder. He says he incurred medical expenses totaling just under $5,000 as a result.
Pegg is seeking damages and believes he’s entitled to at least $95,000. How did he arrive at that number, you ask?
Pegg claims in the lawsuit that Conor McGregor made $15,000,000 from his fight with Diaz, during which he was “significantly” struck by Diaz 166 times. So … $15,000,000 divided by 166 is about $90,000 (the extra $5k comes from the medical expenses).

The Blast also reports Irish motormouth’s lawyers have already responded to the suit and they claim there’s no liability.

If a civil court finds against McGregor, it’s not like he will notice the hit—the loss to Mayweather alone made him a millionaire a few times over.