Conor McGregor Says He Will Fight Manny Pacquiao in 2021

McGregor tweeted that his next fight will be a boxing match with Pac-Man. 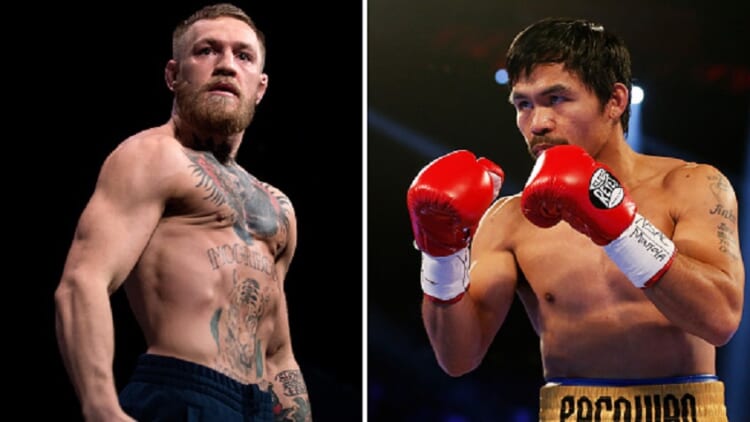 In a tweet Friday, McGregor, a former two-division UFC world champion, casually dropped that he’s “boxing Manny Pacquiao next in the Middle East.”

Anyway all water under the bridge who gives a fook.
I’m boxing Manny Pacquiao next in the Middle East.

ESPN later reported that McGregor–who previously made millions boxing Pacquiao nemesis Floyd Mayweather in 2017—is in “serious talks” to fight Pac-Man, quoting his manager, Audie Attar, who represents both fighters.

Attar told ESPN the boxing match wasn’t a done deal just yet, but the Middle East was one of a few locations being considered to host the match, which would take place in late December or early January. A weight class has not yet been determined, Attar said.

ESPN also reported that a portion of Pacquiao’s earnings from the match would go toward Covid-19 relief efforts in the Philippines. Pacquiao is also a Philippines senator.

Following the Pacquiao fight, Attar said the plan was for McGregor to return to the UFC in 2021. McGregor, who has expressed frustration with his lack of activity this year despited previously declaring that he was “retired”, hasn’t fought since his blowout 40-second TKO win over Donald “Cowboy” Cerrone in January.

McGregor previously expressed interest in fighting Pacquiao in Las Vegas earlier this year. He lost the boxing match to Mayweather after a stoppage in the 10th round, but the mega-hyped MMA/boxing crossover superfight did massive pay-per-view numbers and earned tens of millions for both fighters.

It will be a true honour to have faced two of the greatest boxers of the modern era, afraid of a fight.

Mayweather outboxed Pacquiao when they met for their long-awaited superfight in 2015 and cruised to a wide decision victory. But Pacquiao has since stormed back into boxing and even beat the formerly undefeated Keith Thurman by split decision in 2019 to become the oldest welterweight boxing champion in history at age 40.

After his initial tweet Friday about facing Pacquiao, McGregor said in a second tweet:, “It will be a true honour to have faced two of the greatest boxers of the modern era.”