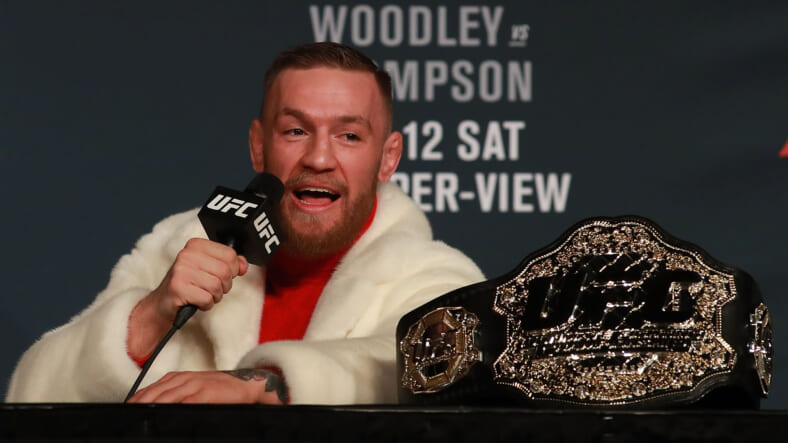 In the world of sports, no one ruled 2016 quite like Conor McGregor. The UFC lightweight champ came into the year as the newly minted featherweight champ after his 13-second demolition of Jose Aldo at UFC 194. He was a big name in MMA, but he hadn’t yet achieved the crossover superstar status of some fighters that came before him. That would quickly change.

Over the past 12 months, McGregor has become a lightning rod—loved and hated in equal measure—and it’s got nothing to do with his skills in the Octagon. McGregor is a superstar because his mouth. With the year nearly over and McGregor slowing down to prepare for fatherhood, we take a look back at a year full of insults and trash talk.

Here are our eight favorite times that The Notorious clowned someone in 2016.

1. WWE Wrestlers—McGregor went in on the entire roster of WWE over the summer, calling them “pussies” and telling them exactly what he’d do to them in the ring.

I didn't mean no disrespect to the @wwe fans. What I meant to say was that I'd slap the head off your entire roster. And twice on Sunday's.

2. John Cena—Just in case the Doctor of Thuganomics didn’t get the message, McGregor had some specific jabs for Cena.

3. Eddie Alvarez—Before their fight at UFC 205, McGregor reminded Alvarez that he was about to face a man unlike any he’s ever seen.

4. Rafael dos Anjos—At the UFC 197 press conference, before dos Anjos pulled out of the fight, McGregor absolutely destroyed the Brazilian for, among other things, not having any friends to stay with in his home country.

5. Nate Diaz — McGregor lobbed at a lot of insults at a Diaz before they’re re-match in August, but few were as funny as him ripping Nate’s t-shirt game on Conan.

6. Jeremy Stephens— At the UFC 205 press conference, Stephens thought it would be wise to talk a little trash to McGregor. He was wrong.

7. Floyd Mayweather—The fantasy fight between McGregor and Mayweather has been one of the biggest, and dumbest, sports stories of the year. But the fact that it would never happen didn’t stop Mystic Mac from making a prediction.

8. Fabricio Werdum—Upon winning the Fighter of the Year award at the 2106 World MMA Awards, McGregor took aim at the former heavyweight champ, and connected in devastating fashion.