Joe Rogan weighs in on whether McGregor could defeat the bigger champion…and what was up with his hands at UFC 205? 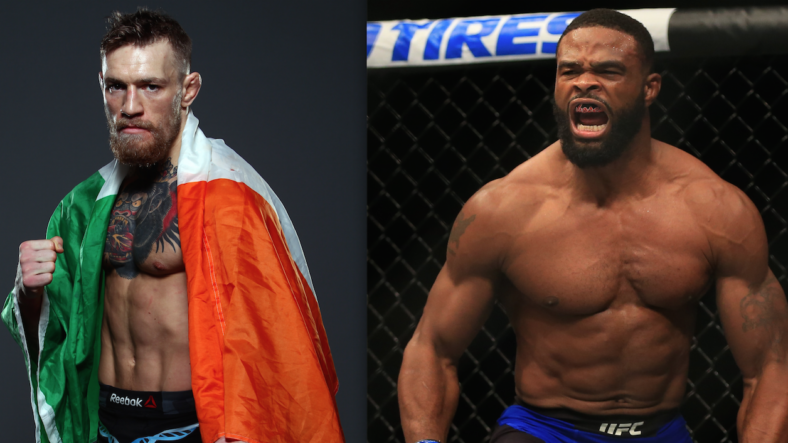 When Conor McGregor walked out of the Octagon in the middle of Madison Square Garden early Sunday morning, he had the UFC featherweight belt over one shoulder and the lightweight belt over the other. Does he have room for one more?

Joe Rogan thinks so. The UFC commentator recently said on his podcast that McGregor could reasonably take a crack at the welterweight champ Tyrone Woodley, who got caught in a tense stare down and subsequent bitter Twitter feud with The Notorious before UFC 205. “I think Conor might even fight Woodley,” Rogan said. “Do you know how crazy it would be if he decided to go up in weight and fight Woodley? I say let him do it. Let him try. I bet Woodley would say it. Woodley will say let him try.”

Rogan’s right about that. Woodley has already said, “If he wants to fight we can sign it right now. I’m good on the fight. I just don’t think it’s a good idea for him.”

Why not? “He’s a guy who fought at 145 pounds. I haven’t weighed 145 pounds since my sophomore year in high school,” Woodley said. He did praise McGregor’s timing and reach, but added, “I’m 100% positive he’s never been hit with the shots I’ll hit him with.”

Before McGregor thinks about getting into the cage with Woodley, he’s going to need to get healthy. Even though he avoided injury during his vicious demolition of Eddie Alvarez, he still hasn’t fully recovered from an injury sustained in August’s fight with Nate Diaz. Did you notice how he was holding his hands behind his back for parts of Saturday’s fight? That’s why.

As McGregor later explained, he developed the habit of holding his hands behind his back as a way to take his right hand out of action. Clearly, he felt like the injury wasn’t enough to keep him from fighting Alvarez, but if he decides to take on Woodley, he’ll want to make sure he’s completely healthy, because this guy is an absolute monster.