This was truly one of the biggest nights in UFC history. 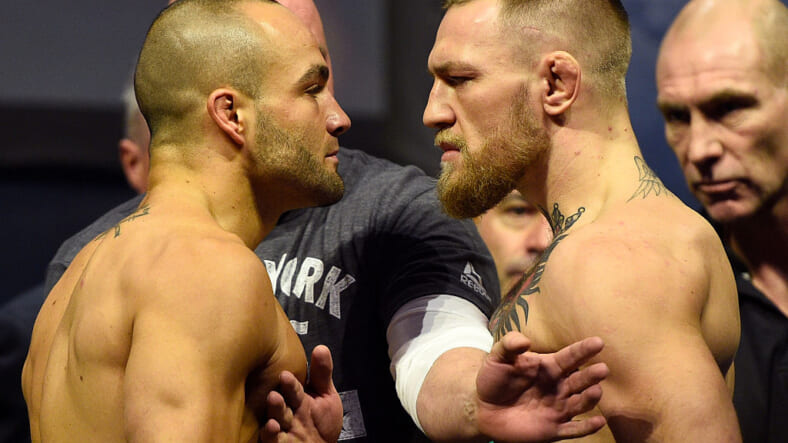 The hotly-anticipated UFC 205 lived up to the hype Saturday night at a sold-out Madison Square Garden in New York City. The biggest match was featherweight champion and smack-talker extraordinaire Conor McGregor facing lightweight champion Eddie Alvarez. McGregor was going for an unprecedented two belts in two weight divisions—and he succeeded.

Philly native Alvarez presented a unique challenge to McGregor—a shredded opponent with serious knockout power who didn’t fear the Irishman’s larger-than-life persona or formidable reputation. From that perspective it was a set-up worthy of a Rocky film—but MMA rarely breaks down as neatly as a movie plot, no matter how much drama the fighters stir up outside the Octagon.

McGregor was the favorite to win and he showed why early in round 1, knocking Alvarez flat several times in a row. Alvarez wasn’t down at that point.

In round 2 McGregor seemed to toy with Alvarez, even putting his hands behind his back at one point before connecting hard. It was a foreshadowing of what was to come, as McGregor had taken Alvarez out well before the end of the round and achieved his goal. The Notorious One now holds the title in the UFC featherweight and lightweight divisions.

Speaking with Joe Rogan after his victory, McGregor was true to form. He said he wanted to take the chance to apologize for all his shit-talk “to absolutely nobody.” Watch one of Conor’s knockdowns below.

UFC 205 was truly consequential, and certainly not just the McGregor and Alvarez show. Miesha Tate fought an intense match against Raquel Pennington, one that saw Pennington wear her down with a smart combo of punches and grappling. Tate lost, then announced her retirement.

Champion Tyron Woodley and Stephen “Wonderboy” Thompson squared off for the men’s welterweight title belt and it was a thrilling fight.

Thompson, with his unpredictable style and punching power, was the favorite to win. The powerfully-built Woodley was no easy mark, though, and early on proved his power with some unbreakable holds that pinned Thompson flat before Woodley segued into some ugly sessions of good old ground & pound. Thompson, one of the more creative fighters in the UFC, wasn’t down and out by any means. Woodley eventually threw everything he had at Thompson in an utterly brutal fourth round, but Thompson endured and seemed little the worse for wear in round 5.

Tyron Woodley remained the champ in the end—but the match was called a majority draw after being initially mistakenly called as a win for Woodley. The Madison Square Garden crowd was not pleased with that.

Middleweights Yoel Romero and Chris Weidman fought for position of number one contender in their class and Romero won by a crushing TKO that left Weidman bleeding and shaken. While speaking to Joe Rogan afterwards, Romero and champ Michael Bisping had an exchange. At one point the suited, smiling Bisping flipped off Romero in response.

Joanna
Jedrzejczyk
and Karolina Kowalkiewicz battled for the women’s Strawweight title. Jedrzejczyk had a belt to lose, while challenger Kowalkiewicz was looking to knock out a personal idol, both fighters hailing from the same region in Poland.

The women entered the Octagon undefeated, never having fought each other in the UFC. After a fast-moving fight in which the steely Kowalkiewicz absorbed some fierce combinations from her ever-aggressive opponent, Kowalkiewicz came back with speed and power. Jedrzejczyk probably faced the biggest challenge of her UFC career in this match, but she retained her belt.

UFC 205 had been promoted as one for the ages, and it lived up to the hype.