“I don’t blame you not mentioning me for the trilogy bout post fight, you know what I’m like when I get going. Vicious.” 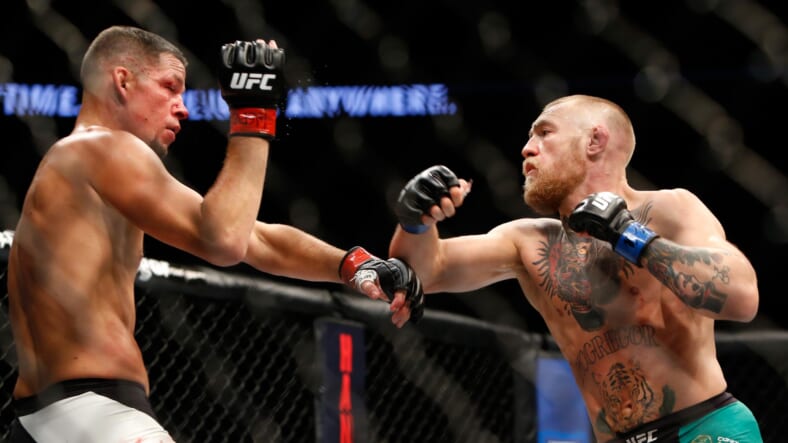 Conor McGregor is ready to go to war again with Nate Diaz in the Octagon.

The Irish fighter took to Instagram to congratulate the Stockton-bred boxing and Brazilian jiu-jitsu specialist on his decisive welterweight win over Anthony Pettis at UFC 241, stirring up talk of a trilogy fight in the process.

“3 years to the day myself and this Mexican warrior went to war,” McGregor wrote.

“Congrats on the win this weekend Nate, it was motivating to see it for my own comeback. I don’t blame you not mentioning me for the trilogy bout post fight, you know what I’m like when I get going. Vicious.”

McGregor continued, noting Diaz’s shift to a more aggressive style in the third round.

“I loved the round 3 style from round 1 that you implemented. It’s what I was hoping you would implement for this bout and was glad to see you do it.”

“I’ll be prepared for it when we go again,” McGregor added.
“If not, respect always. A war for the ages. No bitch talk. Just real shit.”

The pair first met at UFC 196 in 2016, when Diaz choked McGregor out late in the second round. The sequel at UFC 202 later that year went to a slim decision in favor of McGregor.

While Diaz has expressed some interest in another superfight with McGregor—he said, “If they want it, they’re going to call me,” when asked about the prospect at the UFC 241 post-fight press conference—he seemed much more interested in taking on veteran knockout artist Jorge Masvidal.

“No one’s showing any acknowledgment for being the best fighter in the world. Which I am, just like Masvidal. I’m the best martial artist,” Diaz said at the same presser.

“Now we’re fighting for the baddest-motherfucker-in-the-game belt. And that’s mine! So I’d like to defend that against Jorge Masvidal, so if he wants to be the baddest motherfucker, that’s how we gonna do it.”

Masvidal could very well be Diaz’s next opponent. MMA Fighting reports that Masvidal’s manager, Abe Kawa, told ESPN’s Ariel Helwani that the team is meeting with UFC suits this week to discuss Diaz vs. Masvidal.

“I believe that’s a good fight, I think both of these guys will go on, put on a show for everybody and I think that’s what we all want,” Kawa said. “I’m a fight fan at heart, before everything else, and if you’re a fight fan, this is like Christmas for everybody.”

“Right after the fight,” Kawa continued, “I had a brief conversation with the higher-ups and it looks like they like the fight.”

“That being said,” he concluded, “we should be getting together sometime this week to see how that goes.”