Conor McGregor’s Response to Being Called Racist: ‘I’m Half-Black From the Belly Button Down’

Floyd Mayweather called McGregor out for referring to black people as “monkeys.” 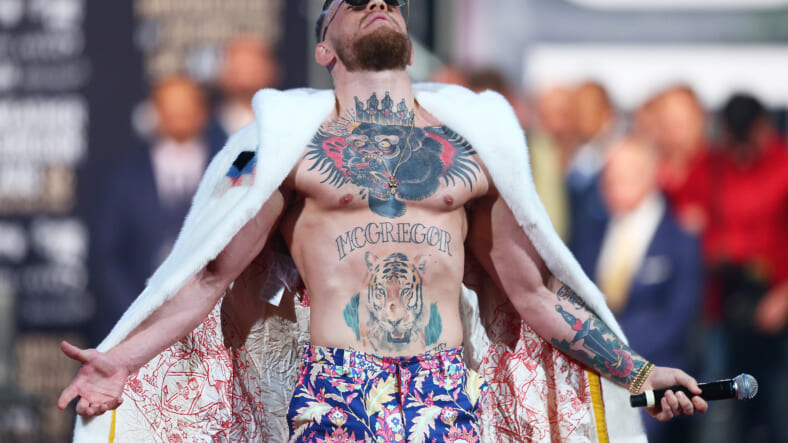 Conor McGregor has said a lot of dumb shit in his day, but Thursday night in Brooklyn, the UFC superstar outdid himself. In response to recent accusations of racism, McGregor said this to the crowd of more than 13,000:

“A lot of media seem to be saying I’m against black people. That’s absolutely fucking ridiculous. Do they not know I’m half black? Yeah! I’m half black from the belly button down. And just to show them that’s squashed, here’s a present for my beautiful, black female fans.”

Then he did a little dance.

Give McGregor credit. At least he’s on brand. Responding to accusations of racism by trotting out racial stereotypes might not be what a publicist would suggest, but McGregor isn’t concerned.

The comments that originally had people complaining came at both the L.A. and Toronto stops of the fight’s hype tour, where McGregor told Floyd Mayweather “Dance for me, boy.” Then, in an interview with Jimmy Kimmel Live’s Guillermo Rodriguez that aired Wednesday, McGregor referenced the “dancing monkeys” in Rocky III, which some thought was a slur directed at black boxers in the movie.

“That doesn’t sit well with me. I’m a very multi-cultured individual. I don’t have any ill feeling toward anyone. I don’t even see color. I just wanted to say something that I could have a little fun with. … I just wanted to play with it and address it in my own little way. It’s stupid and it’s ridiculous, is basically what I was getting at.”

One person who wasn’t buying the denials was Mayweather himself.

McGregor is not one to back down, so don’t be surprised if he revisits this issue on the last stop on the hype tour, which hits London on Friday afternoon.