Cris Cyborg Tested Positive for a Banned Substance, But Shockingly It’s Not a P.E.D.

The UFC’s most feared female is now facing a one-year ban. 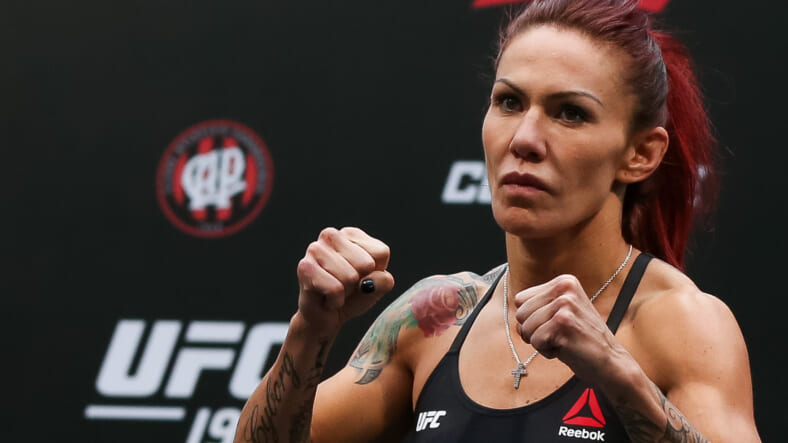 Brazilian MMA fighter Cris “Cyborg” Justino tested positive for a banned substance on December 5 and could face up to a one year suspension. The substance that caused Cyborg to fail her test is the diuretic Spironolactone, she said in a statement. A USADA spokesman also confirmed that.

Spironolactone is not a performance enhancer and Cyborg says it was prescribed to her by her doctor after a brutal weight cut prior to her September 24 fight against Lina Lansberg.

“You can feel confident that the substance they are inquiring about is not for performance enhancing use, and is needed for my specific treatments,” she said in her statement. She went on to cast some blame on her doctor, who she writes “informed me there were no additional steps needed for approval.” The doctor was wrong. If Cyborg was indeed taking the drug for legitimate reasons, she needed a therapeutic use exemption. She is now filing for one retroactively.

Asked about Cyborg’s positive test by TMZ, UFC president Dana White said he was puzzled why Cyborg kept passing up chances to fight in the promotion’s newly created 145-pound division. “I thought it was strange that she was turning down all these fights. Not so strange now,” he said.

Cyborg addressed that issue in her statement too, writing that she has been given a medical suspension by her doctor.

This is not Cyborg’s first run in with USADA. In December 2011, she tested positive for an anabolic steroid after her absolutely brutal 16-second demolition of Hiroko Yamanaka in Strikeforce. She blamed the positive test on a diet pill.

As the UFC grapples with bad PR related it on its biggest stars, it’s pampering another. At least that’s what Amanda Nunes says. The UFC women’s bantamweight champ is scheduled to fight Ronda Rousey on December 30. In the leadup to that bout Nunes has noticed something upsetting—the UFC is pretending like Rousey is the champ.

“The UFC wants to make it easier for her,” Nunes told MMAFighting. “They want to make me kind of the second to make her get stronger or something….But she knows she’s the challenger; I’m the champion. Nobody can change it. Nobody can make Ronda the champion. She’s not the champion anymore.”