Justin Gaethje has replaced Khabib Nurmagomedov for an interim lightweight title fight against Tony Ferguson at the “cursed” UFC 249. 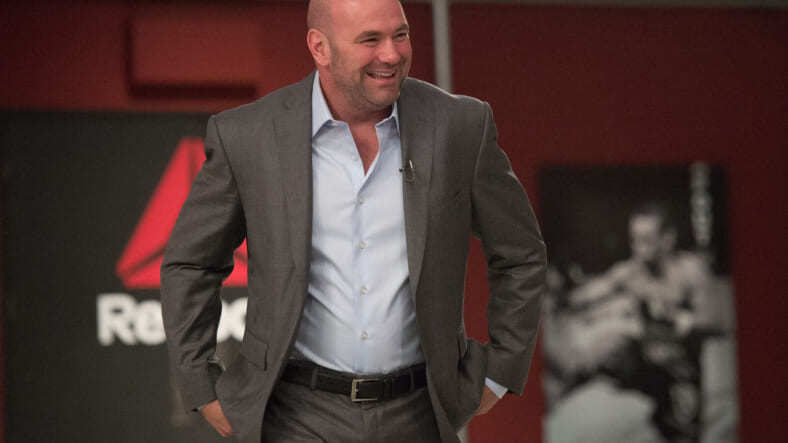 UFC president Dana White has come up with a new plan to save the “cursed” UFC 249 card that’s straight out of a Bond villain’s playbook–he’s securing a private island to stage fights on.

First, undefeated UFC lightweight champion Khabib Nurmagomedov, who is quarantined in his native Russia, announced he was pulling out of his title fight against Tony Ferguson on April 18. Then, on Monday, less than two weeks before the event, Justin Gaethje stepped in to replace Khabib for an interim lightweight title fight against Ferguson.

Tony Ferguson vs. Justin Gaethje for the interim lightweight title on April 18 is signed, per Dana White. Location still TBD. Fight will headline UFC 249. As reported last night, they‘ve zeroed on a location on the west coast of the US to hold this event & hope to finalize ASAP.

Despite virtually every other sport cancelling events because of the global pandemic, White insists UFC 249 will go on, telling TMZ Sports late Monday that he is just “a day or two away” from closing a deal to secure the unnamed private island, where the UFC can hold cage fights during the coronavirus crisis.

“We’ve been working on this since the world fell apart,” White told TMZ Sports. “This is definitely the hardest thing I’ve had to do, ever.”

White said during the interview that he has booked the undisclosed UFC 249 venue for two months, and planned to host fights there every week. Once White secures his mystery island, the UFC boss says he’ll fly in international fighters on private jets, and that all combatants will be tested for COVID-19 before their bouts.

Meanwhile, Uproxx and other outlets reported this UFC 249 location update on April 8:

Jeff Sherwood of Sherdog.com and Kevin Draper of the New York Times brings word that fight — and possibly two months of events going forward — will take place at the Tachi Palace Casino on native land outside of Fresno, California.

The location will be the Tachi Palace Casino Resort outside Lemoore, Calif., about 40 miles south of Fresno, according to the people, who spoke on condition of anonymity because White had not announced the venue.

The casino, which closed the night of March 20 because of the pandemic, is on land belonging to the Tachi-Yokut Tribe, part of the federally recognized Santa Rosa Indian Community.

“As of April 18, the UFC is back in business,” White told TMZ. That still remains to be seen, but check out White’s full TMZ interview above for more.