Nate Diaz Vs. George St-Pierre Is In The Works For UFC 227, According to Dana White 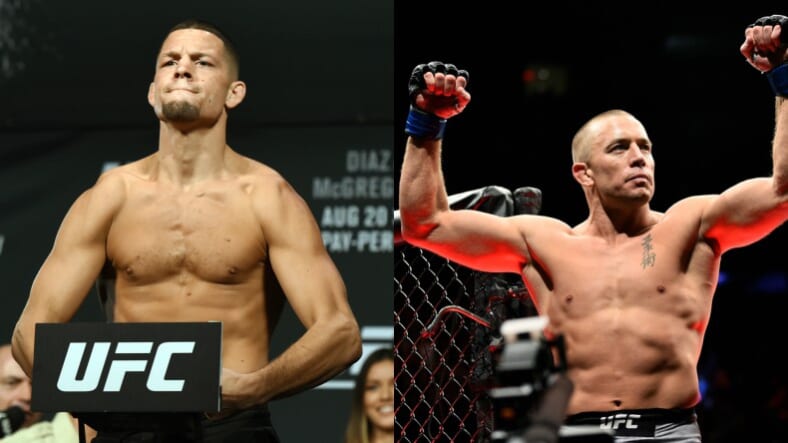 The UFC wants to pit George St-Pierre against Nate Diaz in a blockbuster lightweight bout this August.

“We are working right now to put together a Georges St-Pierre versus Nate Diaz fight,” promotion president Dana White said on the UFC Unfiltered podcast. “It is true, they would fight at 155 pounds.”

Dana White has responded to the rumours… 👀 pic.twitter.com/OrpjBt7QMN

GSP versus Diaz would serve as the co-main event to the bantamweight title fight between T.J. Dillashaw and Cody Garbrandt at UFC 227.

White also said that his “perfect” card would include the rumored light heavyweight fight between Luke Rockhold and Alexander Gustafsson and the already scheduled middleweight scrap between Derek Brunson and Antonio Carlos Junior.

“In my perfect world, if everything goes perfect—and nothing ever goes perfect in this world—[it will be] Dillashaw vs. Garbrandt, GSP vs. Diaz would be the co-main, Gustafsson vs. Rockhold and Brunson vs. Antonio Carlos Junior.”

Last November, the Canadian legend returned to the Octagon after a four-year hiatus and submitted Michael Bisping to win the middleweight title, but was forced to vacate the belt due to medical complications. He’s also the UFC’s former three-time welterweight champ.

While Diaz is a veteran contender with two epic wars against Conor McGregor under his belt, he’s never risen to the top of any division in the UFC. But unlike GSP, the Stockton slugger has fought at lightweight before.

If these blockbuster bouts actually get made, we’ll have a lot to look forward to when UFC 227 kicks off August 4 in Los Angeles.