These two got put to SLEEP. 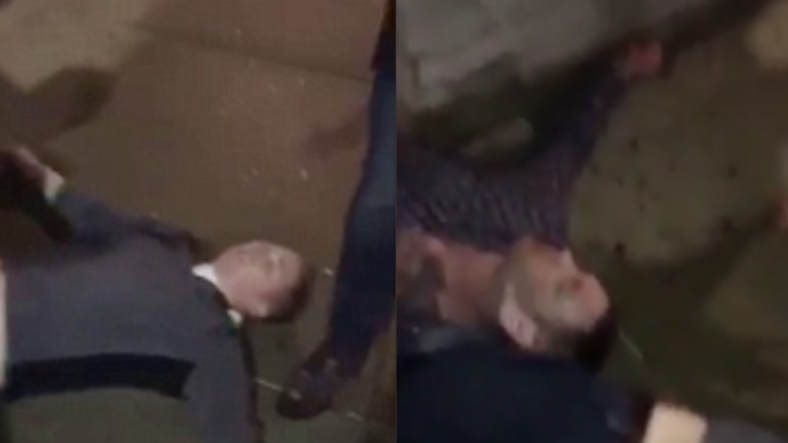 Did he or didn’t he?

The bizarre case against New York Jets cornerback Darrelle Revis–who stands accused of knocking two dudes the hell out in a late-night street fight–has taken a weird turn following the release of a video of the men allegedly knocked out cold by the 31-year-old NFL star.

Last week, Pittsburgh Police charged Revis with “robbery, terroristic and aggravated assault” following the street corner beatdown that left both men unconscious for about 10 minutes…yep, these two got KTFO. Watch the aftermath video obtained by TMZ:

In the clip, a man can be heard shouting, “Hey! I knocked both these motherfuckers out! Both of them! They both asleep! Shut up before I knock your ass out next. Both of you shut up.”

What’s unclear is whether Revis is the badass speaking in the TMZ clip, as some reports mentioned that a second man came to Revis’ aid during the fight.

“A verbal argument followed. A male came to assist Revis. Both the 22-year-old and the 21-year-old state they were punched then remember waking up to talk to police. Witnesses state the two were unconscious for about 10 minutes.”

Revis attorneys Robert G. Del Greco Jr. and Mark Fiorilli said in a statement that the voice of the man is definitely not Revis, and said TMZ’s footage will end up exonerating Revis of all charges related to the brawl.

“Darrelle Revis absolutely, categorically and positively did not knock out anyone, did not conspire with anyone to commit an assault, did not say ‘shut up before I knock your ass out next,’ and surely did not ‘rob’ another of a cell phone. The voice and admissions made on the video are NOT that of Darrelle Revis. We have no doubt but that further investigation relative to the clothing and voice verification will corroborate the above assertions.”

Whether it was an unidentified puncher or Revis behind the beatdown, we’ve gotta say it’s pretty impressive to put two guys to sleep like that all by yourself.