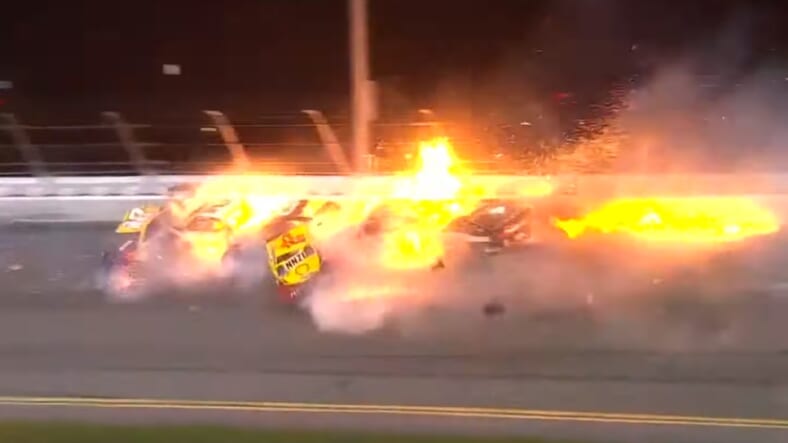 A crazy last-lap crash at the Daytona 500 helped massive underdog Michael McDowell take the first win of his career on NASCAR’s biggest stage.

ESPN reports that Brad Keselowski attempted to pass teammate and race leader Joey Logano on the final lap. When Logano blocked Keselowski, both of them bashed into the sidewall, collecting other drivers along the way. McDowell kept his foot down and drove right through the wreckage. Fortunately, no drivers were injured in the fiery spectacle.

Teammates Joey Logano and Brad Keselowski wreck on the final lap, and @Mc_Driver is the #Daytona500!CHAMPION! pic.twitter.com/N9E7uANXQl

“I knew he would go for a race-winning move, and my plan was to let him make that move,” McDowell said. ”I knew I didn’t want to make my move too early, so I was committed to the [Keselowski] bumper; and when he made the move, the hole opened up.”

McDowell was a 100-1 underdog heading into the “Great American Race” and NASCAR Cup Series opener. The win is his first in 358 Cup starts.

Another look at the big wreck on the last lap of the #DAYTONA500.

All drivers have climbed out of their cars. pic.twitter.com/UmRtWoJ5YA

“So many years just grinding it out and hoping for an opportunity like this,” McDowell said according to AP. “Such a great way to get a first victory — a Daytona 500. Are you kidding me?”

We all knew a storm was brewing coming to the finish.@mattkenseth and @gbiffle react to the crash and break down @Mc_Driver's big win during the #DAYTONA500 Watch Party! pic.twitter.com/pOELmJQzSL

“I saw the lights come on (for the caution), and I knew it was over right then,” Elliott said. “We had a fast car. We weren’t as good as I thought we were on Thursday (in the Duel 150-mile qualifying race). I thought we did a really good job of executing today, staying out of trouble.”

The chaos wasn’t limited to the last lap. As the official NASCAR website notes, Christopher Bell’s contact to the rear bumper of Aric Almirola’s Ford sparked a 16-car pileup on Lap 14.

The agony of defeat for Brad Keselowski. #NASCAR #Daytona500 pic.twitter.com/eKi0CpqFSh

“We were just getting pushed too hard too early,” Almirola said. “It’s a long, long race. Man, we were in a fine position, just sitting there riding around in the top two, three, and the 20 (Bell) just came with a big run and hit me really hard in a bad spot It turned me to the right and tore up our race car and ended our Daytona 500 way too early.”