“I sincerely apologize to the brave man that was injured.” 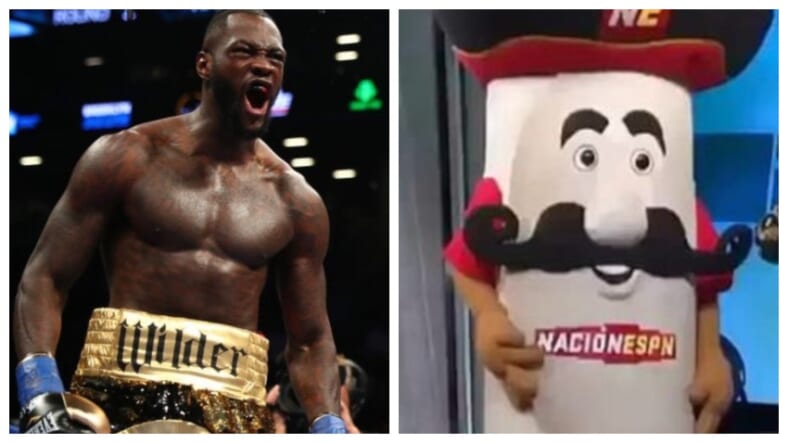 @BronzeBomber recently appeared on the @ESPN show ‘Nacion’ to promote his upcoming fight against @Tyson_Fury, and part of his appearance included a scene with a giant mascot tortilla in a sombrero. pic.twitter.com/xhctDNOD4T

Heavyweight Deontay Wilder was on a Spanish-language ESPN show, Nacion, to promote his Dec. 1 fight against Tyson Fury when the mascot dust-up seen above occurred. The tragedy of the fallen burrito man is already legend, in part because it’s an open question as to whether this was a stunt or not.

If the rumor he broke the jaw of the man inside a mustached burrito costume is true, it’s clear Deontay Wilder didn’t mean to do it. After all, the man could do damage to a brick wall with a hard right. He’d know that foam padding in a mascot’s getup didn’t have a prayer.

In Wilder’s defense, it appears as though the show’s hosts put him up to it. And Wilder has taken issue with some reports about the punch.

Yea, Anything headlining I didn’t know a “Human Being” was in there is just straight “Click Baiting” like come on now, I guess the Mascot rolled out there. show so respect! I sincerely apologize to the brave man that was injured (if this is true) I have the up most high respect for him, his participation, willingness and courage. If this is true @nacionespn I personally would like to invite him to my Dec.1 fight. Word Is Bond✊🏿 -CHAMP #BombZquad #PeoplesChamp

In his Instagram post Wilder called suggestions he didn’t know he was punching a human instead of a terrifying burrito monster (no one would blame him for the punch if that was the case) clickbait. Then he expressed regret. “I sincerely apologize to the brave man that was injured (if this is true) I have the up most high respect for him, his participation, willingness and courage. If this is true @nacionespn I personally would like to invite him to my Dec.1 fight.”

That’s actually a pretty sweet offer as long as a fancy suite and a lot of booze to soothe the pain from a healing jaw are involved.

Social media lit up with commentary about the footage.

HAHA…kinda funny but I still think Tyson Fury will beat him!
VIDEO: Deontay Wilder apologises to injured mascot for KO on live TV and offers them tickets as compensationhttps://t.co/o2b83JMsKD

Like i dig Deontay but he cant be this crazy that he put that force into his punch smh! Cmon dude

While boxing is deadly real and pro wrestling is theater, both the sweet science and its cousin MMA aren’t above adding drama in the run-up to a big match. Anyone willing to get up in front of the public and throw hands like that has to have a bit of the performer in them.

Wilder doesn’t look anything but fierce after the knockdown and the whole goofy setup kind of feels like a stunt—either by Wilder’s crew collaborating with the hosts of Nacion or by the show’s producers seeking attention.

Whatever the truth, it’s obvious the only place more dangerous for a burrito than Taco Bell is the wrong end of Deontay Wilder’s fists.