“There’s been a lot of animosity and a lot of words that were said, and it just came out of me tonight.” 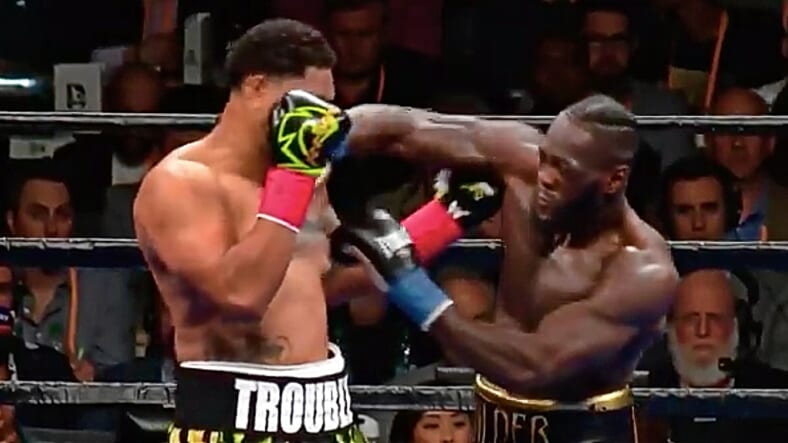 Well, that was quick.

Deontay Wilder made very short work of Dominic Breazeale Saturday night at Barclays Center in Brooklyn. The bad blood between the fighters—which began in 2017 with a scuffle between the pair and their teams at a hotel—ended with Wilder’s big right hand flattening his opponent at just past two minutes into the round.

To his credit, the 6’7″, 255-pound Breazeale didn’t stay down all that long, but it was still obviously all over—and with this victory, Wilder tied Muhammad Ali, retaining the heavyweight belt in nine consecutive title fights.

Any blow-by-blow of a fight this short is silly. Suffice to say after Wilder landed his first big shot, he could see a change in his opponent. That was basically like a shark scenting blood in the water; Breazeale was done for, he just didn’t know it yet.

After the fight, Wilder said, “Everything just came out of me tonight.”

“I know it’s been a big build up,” he continued, “There’s been a lot of animosity and a lot of words that were said and it just came out of me tonight. That’s what makes boxing so great.”

Wilder then detailed the shift in his opponent’s demeanor that put him on full offense. “When I hit him with the right hand the first time his body language changed. When you’ve been in with so many guys, you can recognize body language.”

For his part, Breazeale indicated he wasn’t done yet. “This was a situation where [Wilder] landed the big right hand before I did,” he told reporters after the match, “I thought I was going to come on in the later rounds. I’ll be back and go for the heavyweight title again.”

Deontay Wilder, meanwhile, is already looking ahead to the next possible opponent. That could be Luis “King Kong” Ortiz, possibly Anthony Joshua, at the outside Tyson Fury. It’s not clear.

Whatever the case, Wilder said, “all these fights are in discussion. The big fights will happen. I just want you to have patience.”

“You know what the saying is,” he concluded,”good things come to those who wait.”

Which is true. Knockouts are bad for the one being knocked out, and Dominic Breazeale didn’t have to wait long to receive his at all.