This big-mouthed heckler nearly got destroyed. 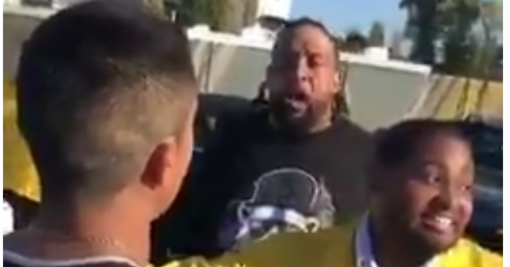 A foolhardy football fan stands accused of trying to goad Raiders left tackle Donald Penn into beating him up on video so he could sue the hulking NFL bruiser.

In what sounds like one of the most painful set-ups in the history of sports scams, the heckling fan allegedly hoped Penn would attack him as smartphone cameras rolled in the stadium parking lot after the Raiders’ 30-17 loss to the Ravens on Sunday.

Soon after the game, a group of fans heckled Raiders left tackle Donald Penn, who was leaving the players’ parking lot in what he now says was a planned extortion attempt.

The insults were focused on the two-year, $21 million extension Penn signed last month. The exchange quickly escalated, as Penn got out of his car and approached the group while one of the fans took off his Raiders cap as if preparing for a fight.

On Monday, Penn posted screenshots from what appears to be an Instagram account showing Penn posing with the fan, telling other athletes to be careful and that this fan had it planned out hoping to extort Penn.

In the comments, a person whom Penn identifies as the fan, discussed getting punched by Penn and suing him, including one comment that reads, “I keep dreaming of him punching me if he sees me after the game!”

The accused aggressive fan responded on Instagram by sharing their DM trash talk before the altercation:

The fan who removed his cap, Ivan Chavarria, denied that he had thrown anything at Penn.”I did not throw shit,” he said in an Instagram video.

“I would not disrespect another man’s property like that. I didn’t throw anything. If I would have thrown something, you don’t think cops and security would have bomb-rushed me? You feel me? They would have rushed to me because I’m throwing some shit. Stop lying.”

Regardless of who’s telling the truth, the incident speaks to the turmoil surrounding the Raiders after three consecutive losses. The team has looked lost without injured franchise quarterback Derek Carr, losing to a bottom-10 offense on Sunday.

The Raiders will play their next game this Sunday against the Los Angeles Chargers.