They Won Olympic Gold, Now Everyone Wants These Canadian Skaters to Hook Up

“If Tessa and Scott don’t get married, love is a lie.” 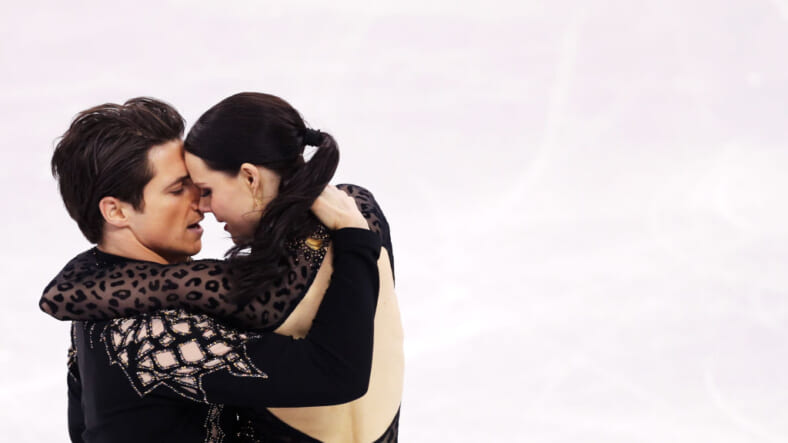 Everyone knows Olympic athletes are a superhuman group of individuals who probably (definitely) live by the life motto: Train hard, bang harder.

But there’s something about sex and the Olympics that’s been bothering many figure skating fans: We still don’t know if Canadian skaters Scott Moir and Tessa Virtue are hooking up despite their sexual tension that’s so thick you could cut it with a knife, and everyone is just like:

Seriously. The entire internet wants them to finally admit that they’re totally doing it. I mean, just watch their routine and tell me they didn’t immediately go home afterwards to rip those stretchy spandex bodysuits off of each other.

After watching their steamy Moulin Rouge routine that was 1) so sexy it needed to be toned down to be more family-friendly, and 2) so good that it won them two gold medals, fans everywhere instantly became obsessed with the idea of Virtue and Moir giving in to the sexual tension and becoming a couple.

All i am saying is when Tessa and Scott get married we need to treat it like a royal wedding and shut down the country for a day and live stream it on cbc, just saying #Can

sooo can tessa and scott get married already???

Tessa and Scott's fake love is ruining real love for the rest of us.

Even Ryan Reynolds is ‘shipping the duo, and in true Ryan Reynolds fashion, he proudly announced he wants them to raise his children.

Go @TeamCanada!!@CassieSharpe is a legend — makin’ it look easy. And thank you @tessavirtue & @ScottMoir for agreeing to raise my children as your own.🇨🇦

And here I’ve been wracking my brain to come up with a post-competition career path … Scott, get the mini van!

However, they’ve been super coy about their personal lives, and Moir kind of dismissed the entire thing in a press conference, but I’m gonna go ahead and say they’re definitely banging. It’s impossible for them not to be.

“We love working together, we’ll have to find just in which way we want to do that. Relationship status is ‘none of your business,’” Moir said, making everyone super sad. “But I can say that the last two years, we’ve been in a very committed relationship with our sport.”

Yeah…and with each other. Duh.

“We’re the type of athletes that dive headfirst into the whole process and I just honestly don’t know where you would find time for that. And part of the reason was that maybe why we wouldn’t continue was to open up that side of our life, maybe, and see where that goes, and that’s as personal as I’ll get, but let’s see what happens.”

when you find out Tessa and Scott aren’t actually together pic.twitter.com/WL76WIx4oE