This NFL scandal keeps getting worse and worse… 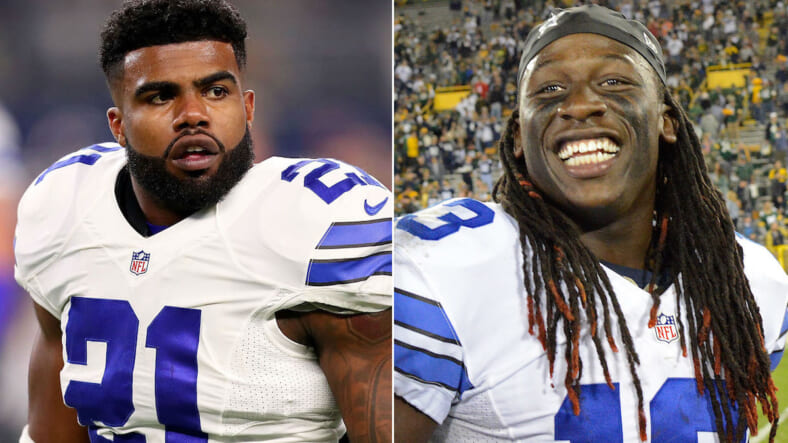 A few weeks back, Cowboys running back Ezekiel Elliott was suspended six games for violating the NFL’s personal conduct policy—not exactly what the NFL wants from one its biggest new stars.

But after investigating allegations of domestic abuse, which Elliott denies, the league handed down the punishment in an obvious effort to avoid the PR nightmares its brought upon itself by babying abusers in the past.

Now, Elliott has mounted an appeal in a desperate bid to make sure he can play football this weekend. And that appeal is based largely on Elliott’s own allegations, which suggest that Tiffany Thompson, his ex-girlfriend, was the one victimizing him.

Elliott has claimed that Thompson harassed him and broke into his email with the intention of sharing “untruthful things” to “hurt his image.”

She also reportedly texted with a friend about blackmailing Elliott by selling sex tapes of the two of them.

[Thompson]: What if I sold mine and Ezekiel’s sex videos[Friend]: We’d all be millionaires[Friend]: Let’s do it

[Friend]: We could black mail him w that

[Thompson]: I want to bro

The latest allegation from Elliott is that Thompson slept with an ex-teammate and then bragged about it to him. The revelation came out in Elliott’s appeal of the NFL’s suspension. Here’s how he told the story, according to the Dallas Morning News:

“When Tiffany saw me doing well or just doing well without her, she did not like that and she would go through any measure to kind of ruin my moment or ruin what’s going on.

“And so particularly this moment was — after we had a big win verse the Steelers [on Nov. 13], and I had a very good game, and while I’m boarding the plane from Pittsburgh to Dallas, I received like 15 texts from an unknown number, and the texts were screen shots of text messages between Tiffany and one of my current teammates that play with me for the Cowboys.“And then there was a picture of a hotel reservation, which had her name and also his name on it. Basically, her telling me that she slept with one of my teammates the previous week while we were in Cleveland.”

That player was revealed to be Lucky Whitehead, a former Cowboys wide receiver who was cut from the team after he was wrongly arrested for shoplifting in a case of mistaken identity.

The team didn’t take him back after the mistake was revealed and he ended up signing with the Jets, who just cut him as the start of the season approaches.

Elliott’s claims make Thompson sound unstable, but her claims against him are far worse. In 2016, she told police that he essentially used her as a punching bag.

“He has lost control and yanked me into the wall, busted the side of my jaw,” his accuser tells police. “… My face was swollen and a little bit bruised. And then I did have thumbprint marks on my hand.”The accuser pointed to July 16, 2016, in Columbus, Ohio, saying she questioned why Elliott’s phone kept ringing, with other women calling. She said that, in response, Elliott “dragged me out of the bed and then he threw me up against the door in his bedroom.

Then he placed his right hand around my neck and started choking me.” She said the choking lasted about 20 or 30 seconds.

Elliott is hoping that his appeal, which seeks to “completely refute these false allegations,” will result in his being able to play for the Cowboys this weekend. The team hopes so, too.