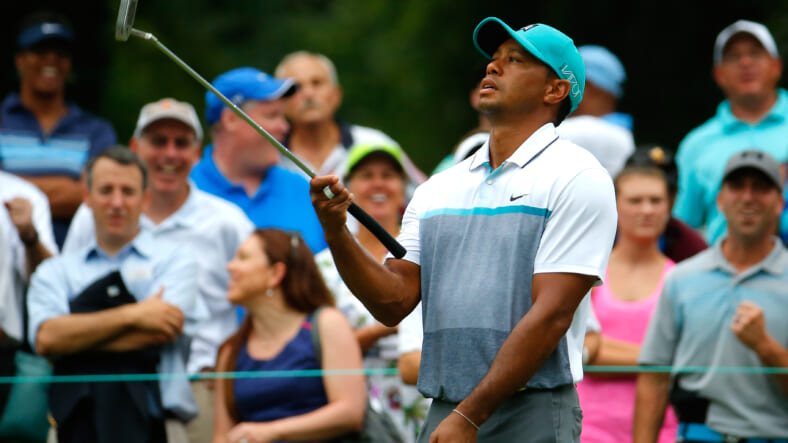 A loud-mouth Tiger Woods fan was almost pummeled over the head with a bunch of five irons Sunday after he yelled during Tiger’s backswing, screwing up a birdie putt at the  Farmers Insurance Open at Torrey Pines.

The moment came as Tiger pulled back his putter for his fourth shot on the par-5 13th hole. The gallery was quiet, until it wasn’t. “Get in the hole,” someone yelled before Tiger made contact with the ball.

The putt missed the hole, the crowd groaned and Tiger threw his head and hands up in frustration.

It didn’t take long for a video to surface of the man behind the yell. And the fans around him were not pleased. “Get the fuck out of here, man,” one very serious golf bro tells the visor-wearing loudmouth, who appears to be apologizing.

Listen closely and you’ll hear someone else say the guy should get his ass beat. Some golf fans on Twitter wanted an even harsher punishment.

Anyone who yells “Get in The Hole” back swing or not should be executed.

Yelling while a golfer is about to take a shot is one of the most obvious faux pas in sports. But this is also a pretty fantastic reminder that athletes in nearly every other sport deal with screaming fans and obnoxious hecklers as a matter of course.

They shoot free throws with pool noodles waving everywhere. They throw pitches with the crowd chanting their name. They take snaps with decibel levels in the triple digits. Not golfers though, they’re much too fragile for all that.