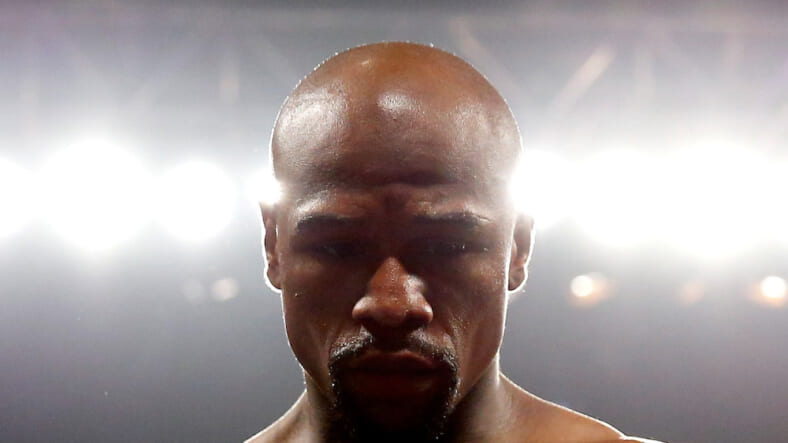 It might be time for Floyd Mayweather to change his nickname.

The man who calls himself “Money” and regularly flaunts his vast wealth online is currently experiencing some financial woes, according to ESPN. At issue is Mayweather’s inability to cut a check for his 2015 taxes and it was revealed in a tax court filing from July 5.

The documents ask the IRS to get off Mayweather’s case until he fights Conor McGregor in late August. That event will leave him with a nine-digit pay check and enough cash to cover his bill with Uncle Sam.

What’s surprising is that Mayweather apparently can’t cut a check now. The court petition he filed explained that even though he has substantial assets, “those assets are restricted and primarily illiquid.”

Although the taxpayer has substantial assets, those assets are restricted and primarily illiquid,” the petition said, according to the legal website Law360. The IRS has reportedly suggested that Mayweather sell off some of his illiquid assets to get the cash he needs to pay his bill. But he appears reluctant to part with this toys.

“The taxpayer has a significant liquidity event scheduled in about 60 days from which he intends to pay the balance of the 2015 tax liability due and outstanding.”

It’s unclear how much Mayweather owes, but it’s sure to be a chunk of change. He made around $220 milloin for his fight against Manny Pacquiao in May of 2015 and he made another $40 million or so for fighting Andre Berto a few months later.

Add in the late fees—he’s currently 15 months past due—and it’s little wonder that he decided to come out of retirement for a massive pay day against McGregor.

For months, people have been suggesting that Mayweather has nothing to gain by fighting McGregor. If he wins, no one will be impressed.

If he loses, his legacy will be forever tarnished. But now, it seems he does have something to gain—his freedom from the tax man.

And after he blows out McGregor and collects yet another colossal paycheck for what is sure to be his easiest fight ever, he can always go back to running his Vegas strip club, Girl Collection. Tax woes or not, we have a feeling Mayweater is gonna be OK.