A ‘Blindsided’ Floyd Mayweather Pulls Out Of Fight With Japanese Kickboxer

The retired boxing legend says he never agreed to an official bout with the 20-year-old martial artist known as “Ninja Boy.” 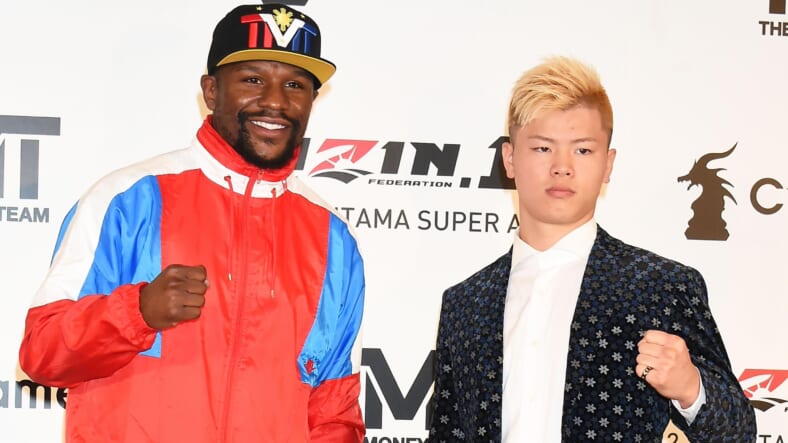 The undefeated former boxing pound-for-pound king claims that he originally agreed to participate in an unofficial exhibition bout “for a very large fee” before a small group of wealthy spectators in Japan on New Year’s Eve, but that he and his team were “completely derailed” at Monday’s press conference.

“First and foremost, I want it to be clear that I, Floyd Mayweather, never agreed to an official bout with Tenshin Nasukawa. In fact (with all due respect) I have never heard of him until this recent trip to Japan,” he wrote in a new Instagram post.

“What I was originally informed of by Brent Johnson of “One Entertainment” was that this was to be an exhibition put on for a small group of wealthy spectators for a very large fee.

“This exhibition was previously arranged as a “Special Bout” purely for entertainment purposes with no intentions of being represented as an official fight card nor televised worldwide.”

“Once I arrived to the press conference, my team and I were completely derailed by the new direction this event was going and we should have put a stop to it immediately,” he added.

ESPN has further details on how the fight plans transpired:

Mayweather, the 20-year-old Nasukawa, Mayweather business associate Brent Johnson—who helped put the deal together—and executives from the Rizin Fighting Federation appeared at Monday’s news conference and announced the fight for Dec. 31 at the 37,000-seat Saitama Super Arena in Saitama, Japan, about a half-hour drive outside of Tokyo. Rizin is a Japanese promotional company founded in 2015 that puts on MMA and kickboxing events.

Mayweather pulled out of the bout before any rules, round limit, or weight class had been determined. He initially posted a photo of himself wearing Rizin MMA gloves to Instagram, a post that has since been taken down.

“I want to sincerely apologize to my fans for the very misleading information that was announced during this press conference and I can assure you that I too was completely blindsided by the arrangements that were being made without my consent nor approval,” Mayweather continued.

“For the sake of the several fans and attendees that flew in from all parts of the world to attend this past press conference, I was hesitant to create a huge disturbance by combating what was being said and for that I am truly sorry.”

The apologetic explanation ended with an on-brand statement from “Money.”

“I am a retired boxer that earns an unprecedented amount of money, globally, for appearances, speaking engagements and occasional small exhibitions.”

Even though Mayweather has canceled his oddball battle with the kickboxer known as “Ninja Boy”, he has expressed interest in two other highly lucrative fights. Most recently, he responded positively to UFC lightweight champion Khabib Nurmagomedov’s challenge to box in Russia.

“Oh, we fighting,” Mayweather told TMZ. “We can make it happen.”

Another feasible option could be a rematch with Manny Pacquiao. He’ll have to wait until at least next year, as the aging Filipino legend is set to defend his welterweight title against Adrien Broner in January.

Then again, Money may decide to stay at 50-0 and kick it for a while in his brand-new “concrete palace.”

Anyways, it was fun while it lasted!