Why UFC Heavyweight Francis Ngannou Is the Scariest Man in MMA 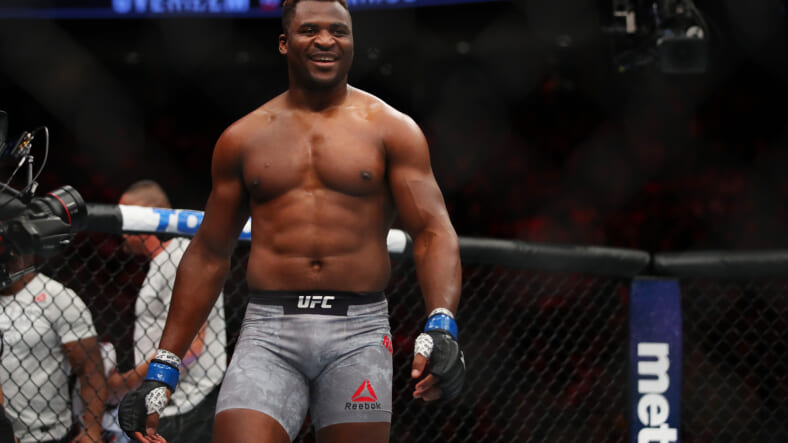 The UFC’s superstars have had a bad run the past couple years. After Ronda Rousey’s disappearance, Conor McGregor’s flirtation with boxing and Jon Jones’s dirty pee, Dana White and company are desperate for a new superstar. Enter Francis Ngannou.

The 31-year-old bruiser from Cameroon is on the cusp of becoming the UFC’s next big star and he has his chance to earn that label at UFC 220 Saturday in Boston, where he’ll take a shot at Stipe Miocic and his heavyweight title.

Remarkably, Ngannou is the favorite going into the championship bout despite being the challenger. And he’s getting tons of hype.

The Ringer described him as “part Mike Tyson, part Ivan Drago, part wild imagination.” Deadspin called him “the most exciting talent in MMA.”

Much of the hype around Ngannou is based on two punches he’s thrown. The first came on November 24 at the UFC Performance Institute and it broke the world record for punching power.

The second came a few days later when he stepped into the Octagon against Alistair Overeem. Ngannou was riding a nine fight winning streak but the bout against Overeem counted as a major step up in competition. But Ngannou wasn’t intimidated, promising during their face off to put Overeem to sleep.

And that’s just what he did.

Lest you confuse Ngannou for a puncher and nothing more, he proved this week, with the help of his trainer, that he can kick too.

.@francis_ngannou drooping his coach with a leg kick at #UFC220 open workouts pic.twitter.com/Y3kuK1VtrI

Lost in all the hype surrounding Ngannou is the 6’4″, 245-pound Miocic, who hasn’t lost in over three years and has finished four of his last five fights in the first round. Ngannou may be the shiny new toy with the wrecking balls on the ends of his arms, but Miocic has been at the top of the sport for years, fending off two challengers for his title already.

The difference between this fight and those two is that his opponent is favored on Saturday and Miocic plans to use that as extra motivation.