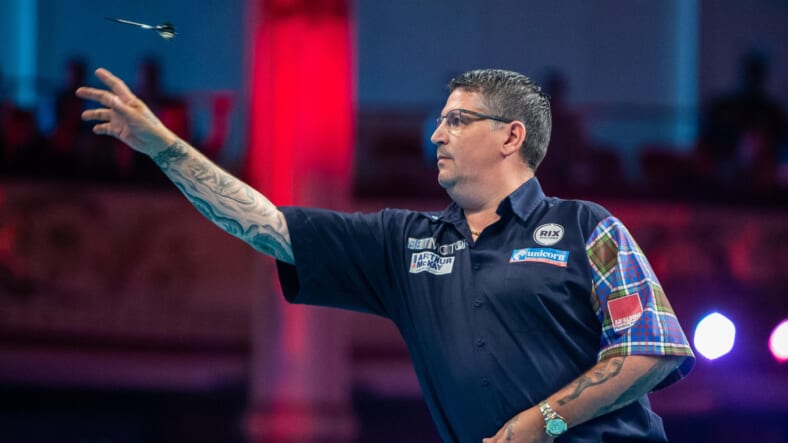 A pro darts player just made history by throwing a perfect leg, and video of the moment is going viral.

Gary “The Flying Scotsman” Anderson managed to execute an incredibly rare “nine-darter” to win the quarter-final round of the 2018 World Matchplay tournament in Blackpool, England.

The audience’s reaction in the video above speaks to the feat’s greatness. They go wild after he hits the first group of three. The crowd roars when the fourth, fifth and sixth darts land. When Anderson nails the ninth, everyone—including the announcers—collectively lose their damn minds.

It’s the first time anyone has hit a nine-darter in competition since 2014. Yahoo Sports has further details:

Nine is the minimum number of darts required to hit 501 and win a leg, but a ‘nine-darter’ is extremely hard to come by.Anderson started with back-to-back 180’s, before finishing up with the 141 checkout to send spectators into a frenzy.

“Hitting the nine-darter so early was actually the worst thing I did, because it gave me time to think about it and I missed a lot more darts at tops than I normally do.”

The 47-year-old darts veteran’s legendary performance earned him a $59,000 purse and many tweets of praise:

The 9 dart leg. The back to back 141 checkouts. The big fish. The near big fish. The maximums. The nerve shredding excitement. The fly. The class of 2 ace arrowsmiths. Thank you Gary Anderson and Joe Cullen. Darts. Yeah. Darts.

Gary Anderson hits a nine-darter and holds his nerve to pull off a nail-biting 19-17 victory over Joe Cullen in a World Matchplay classic to reach the Semi-Finals! #BVDarts pic.twitter.com/LHXVRf3rj4

If Anderson’s stellar streak continues, he’ll walk away with the $150,000 grand prize.