Yoel Romero is stepping in and will likely fight Bisping at UFC 213. 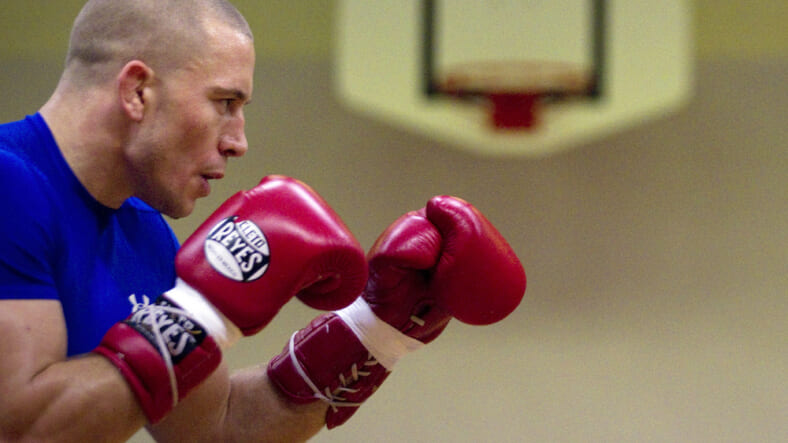 The long-awaited comeback of UFC legend Georges St-Pierre isn’t going to happen anytime soon, after all. On Wednesday, UFC president Dana White announced that GSP has been pulled from a planned title fight against middleweight champion Michael Bisping. Middleweight number one contender Yoel Romero will take his spot.

“The thing was supposed to happen in July. Michael Bisping is going to have to defend his title now. We’re not waiting for GSP,” White said on Fox Sports Australia.

GSP has been accused of delaying the fight, which has never had a solid date, for months. In March, Bisping blamed this on GSP’s tiny testicles. “I think GSP is waiting for his balls to grow,” Bisping told TMZ Sports. “I think he’s doing some bicep curls, taking some protein shakes and then when he’s big enough, then maybe we can do the fight.”

GSP, of course, hasn’t fought in over three years and he maintains that he’s just making sure he’s prepared before he gets back in the Octagon. Last week he posted a video to his social media accounts telling Bisping that he’ll be ready to go anytime after October.

But GSP has delayed so long that White’s not willing to wait. “Georges St-Pierre is saying he will not be ready to compete now until November. Who knows if that’s even the case. It could be next year,” White said.

Though it’s not yet official, it appears the Romero vs. Bisping fight will go down on July 8 in Las Vegas at UFC 213.