Cavs vs. Warriors Isn’t the Greatest NBA Rivalry of All-Time, But It’s Up There

LeBron and Steph haven’t reached the level of Magic and Bird. Not yet, at least. 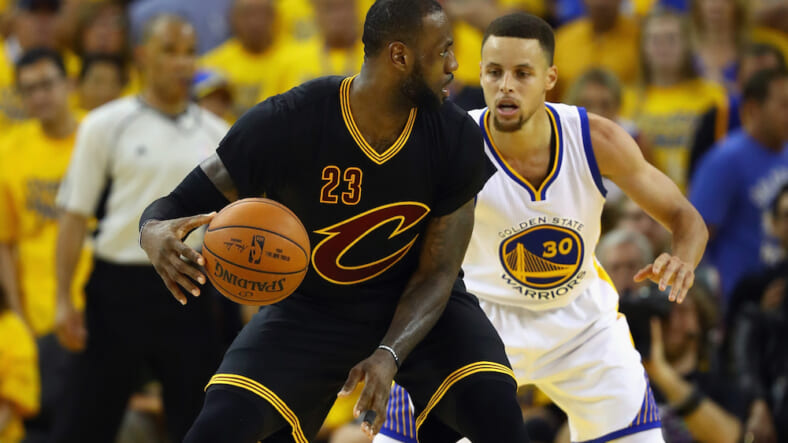 When the Cavs and Warriors tip off game one of the NBA Finals tonight in Oakland, it will mark the third straight year these two teams have met for NBA supremacy. But this series has so much more than that. There’s the burgeoning personal animosity between LeBron James and Steph Curry, the gallery of three-point sharpshooters, and the excitement provided by the possibility that Draymond Green may kick someone in the dick at any moment.

In June of 2017, it still feels premature to count this rivalry among the NBA’s greatest, but it’s getting there. If these two dominant teams meet up again in the coming years—and really, who can stop them?—there’s a good chance it surpasses even these legendary clashes.

Celtics vs. Lakers in the ’60s

The Celtics and the Lakers met in the NBA Finals an astonishing six times in the 1960s, and each time the team from New England walked away with the title. The dominate showing had such a negative affect on Lakers star Jerry West that he swore of wearing green for years.

Celtics vs. Lakers in the ’80s

Magic Johnson and Larry Bird began their rivalry in college when Magic’s Michigan State Spartans beat Bird’s Indiana State Sycamores in the 1979 NCCA Title Game. The following year, they both went to the NBA and in the next decade they’d face off three times in the Finals, with the Celtics winning the first match up in 1984 and the Lakers taking the second in 1985. The rubber match in 1987 went to the Lakers, and Magic took home the MVP.

Young basketball fans may be surprised to learn that Michael Jordan was in the NBA for seven years before his Bulls ever made the Finals. Standing in the way? The bad boy Pistons, led by spark plug point guard Isiah Thomas. The Pistons knocked the Bulls out of the playoffs in ’88, ’89, and ’90. Then, in 1991, the Bulls finally struck back on the way to the team’s first championship ever.

Pacers vs Knicks in the ’90s

As the Bulls dominated the Eastern Conference, the Pacers and Knicks vied for the position of perpetual runner up. While John Starks and Patrick Ewing led the Knicks, the best part of this rivalry was always the battles between super fan Spike Lee and Pacers sharp shooter Reggie Miller.

With Shaq and Kobe, the Lakers were a dominant force in the 2000s, a fact that no team knows better than the Kings. The Lakers knocked the Kings, or the “Queens” as Shaq once called them, out of the playoffs for three straight years, in ’00, ’01 and ’02. But the tensions ran deep here, with fights breaking out in the pre-season and the infamous accusations of NBA rigging game six of the 2002 NBA Finals.