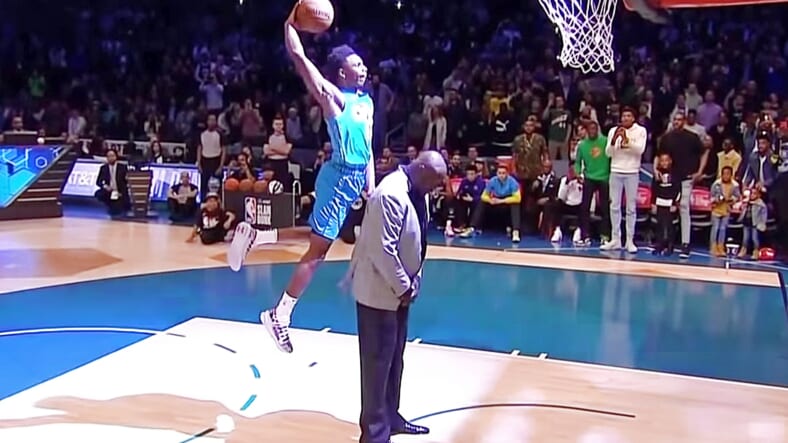 Shaquille O’Neal is 7’1″ tall. He is a famously large man. The idea of vaulting over his head while he’s standing up straight is almost funny. But as 6’5″ shooting guard Hamidou Diallo of the Oklahoma City Thunder demonstrated at the NBA Dunk Contest Saturday, it’s possible.

Diallo did it, landed a perfect dunk, then revealed his true identity for the cameras, unbuttoning his jersey to reveal Superman’s symbolic “S.” A move Shaq could certainly appreciate.

Seriously, the history of the NBA is chock-full of badass athletic moves that strain credulity. Big men with extraordinary athletic prowess can obviously get shit done. And even within that context Diallo’s dunking performance was extraordinary, and he knew it.

DIALLO CALLS OUT SHAQ AND HONEY DIPS OVER HIM! Score of 50. Total 98/100 pic.twitter.com/fk0CStHHrI

Naturally Diallo earned a 50 with that move—a perfect score in this contest—and sailed on through to the NBA Dunk Finals, which he won, beating Dallas Mavericks point guard Dennis Smith Jr.

Watching his feat from various angles, it’s hard to not think Diallo pretty much won the season with that move.