Hank Williams Jr. and All His Rowdy Friends Are Officially Returning to Monday Night Football

Booted from ESPN in 2011 for calling President Obama the “enemy,” Bocephus is back. 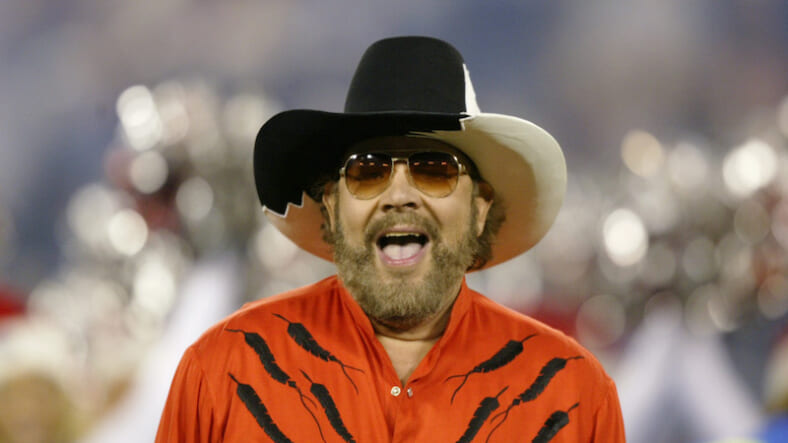 Are you ready for some Hank Jr.? Six years after ESPN parted ways with the country music legend, the network is bringing him back to sing the classic Monday Night Football theme that ran from 1989 to 2011.

The video for the theme was recorded over the weekend in Nashville, the Tennessean reports, with two newer, unnamed artists joining Bocephus. Their names will be announced later this week.

“I think it’s a return to our past in that it’s such an iconic song associated with football,” ESPN’s Stephanie Druley told the paper. “It belongs to Monday Night Football. It really is about returning to what fans know. It’s a Monday night party and that’s what we’re all hoping to get back to.”

The song, which is an altered version of William’s 1984 track “All My Rowdy Friends Are Coming Over Tonight,” was pulled from MNF in 2011 after the unabashedly conservative singer appeared on FOX News and got himself into hot water. While discussing a golf outing between then-President Obama and then-House speak John Boehner, Williams compared Obama to Hitler.

Williams later tried to explain himself, saying he was “misunderstood.”

“Some of us have strong opinions and are often misunderstood. My analogy was extreme — but it was to make a point. I was simply trying to explain how stupid it seemed to me — how ludicrous that pairing was,” he said of Obama and Boehner. “They’re polar opposites and it made no sense. They don’t see eye-to-eye and never will. I have always respected the office of the President.”

As we await the new version of “All My Rowdy Friends,” and the artists sharing the stage with Williams, here’s a look back at the 1989 original that launched the song. It’s quite the time capsule.