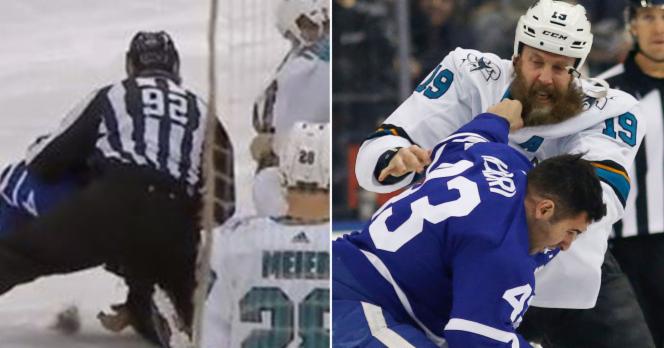 Thursday night’s hockey game between the San Jose Sharks and the Toronto Maple Leafs got off to a seriously hairy start.

Refs rushed to break up the scuffle. Kadri deposited his scraggly souvenir on the ice before rejoining his team.

Kadri literally drops a handful of Thornton's beard on the ice after the fight. Ew. pic.twitter.com/Ncgprzax0G

After the bizarre beard-ripping incident, Kadri told reporters he didn’t set out to give the bigger Thornton a trim, reports CBS News.

“I ended up with a piece of it in my hand,” Kadri said. “I have no idea how that happened.”

“I thought I was a hockey player not a barber. I didn’t mean to grab him there. I mean he’s a big boy. I couldn’t reach all the way across his shoulder. I felt like I just grabbed him in the middle of his jersey and just came down with a handful of his hair.”

The hair ultimately found its way to the glove of backup goalie Aaron Dell on the San Jose bench.

“We were trying to figure out what it was,” Sharks forward Chris Tierney said.

Kadri, who was giving up at least 4 inches and 30 pounds to Thornton, had a welt on the side of his face as a souvenir of the fight.

Kadri went on to score a goal in the second period, helping the Maple Leafs defeat the Sharks 3-2 in a shootout.