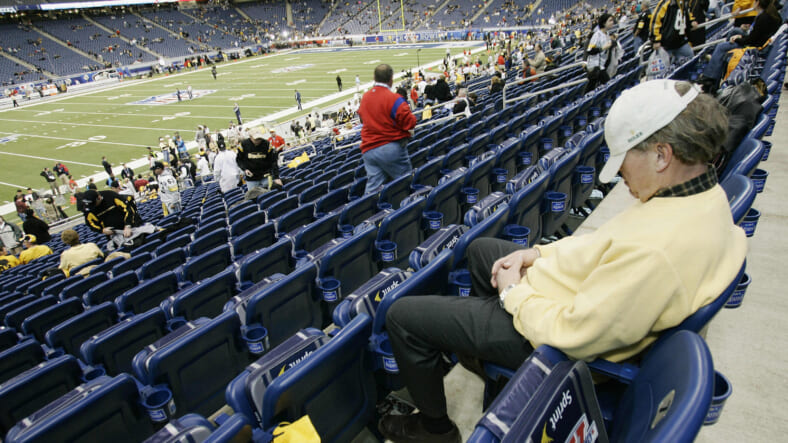 This Sunday, when you’re watching the Super Bowl at home, glance into the stands and take a look at the fans. Then glance at the people you’re watching with and see if you notice any difference.

To most of America, it’ll be obvious. Unlike the pudgy dudes around you sporting their favorite ill-fitting jersey, the seats at Houston’s NRG Stadium, especially those closest to the field, will be dotted with khakis and blazers, the true mark of tickets given out by corporate sponsors.

One of the most enduring criticisms of the Super Bowl over the years is that it freezes out the regular fan with high ticket costs, a neutral site and the abundance of tickets gifted by the NFL to corporate sponsors. By one measure, a quarter of Super Bowl seats will be filled by people with no love for either team and no foam finger on their hand. This is why CBS broadcaster Jim Nantz once said the Super Bowl “takes on the atmosphere of a game being played on a Hollywood soundstage.” And why Ron Jaworski, an ESPN analyst and Super Bowl quarterback, likened the game to a “corporate get-together.”

It’s also why I’d like to suggest the NFL take some lessons from college football’s national championship game, which was played in Tampa last month. The game was hundreds of miles from the homes of both participating teams and it still had an electric atmosphere. I like to think I was part of the reason why, even though I was one of the much-reviled corporate fans taking a seat that could have otherwise been occupied by a member of the Clemson or Alabama faithful.

Dos Equis, the official beer sponsor of the College Football Playoff, flew me down to Tampa and put me up while I was there. They also gave me one of the tickets allocated to a company that plunks down the kind of cash necessary to secure the “official beer” title. And though I wore jeans, not khakis, to the game, I was clearly not among the die-hards in attendance. Neither was anyone else on the trip with me.

That much was obvious as we filed into the stadium, squished between men in Tigers jerseys and women with temporary Alabama tattoos on their cheeks. It was even more obvious once we got to our seats and were surrounded by others without those tell-tale signs of fandom. We weren’t just corporate fans, we were in the corporate section.

But then the game started, and even though neither I, nor the Dos Equis employees with me, nor the other writers on this trip, were fans of either team, we started cheering like morons. Why? Becuase we were all football fans. We’d also all picked a side—Clemson over the evil empire from Tuscaloosa.

Like me, the fans who fill corporate seats at the Super Bowl aren’t necessarily stuffy executives. Many are huge football fans, who snapped up a chance to go to the biggest spectacle in sports. And once they’re in the stadium, odds are they’ll choose a side and get loud.

That is, if there aren’t too many of them. Part of the reason why it was easy to get hyped in Tampa was that much of the stadium was filled with cheering partisans. Their energy was contagious. If the NFL would cut back on the number of sponsor tickets and let in more rabid maniacs, the entire atmosphere would change. And not just becuase the maniacs would be yelling. Their presence would hype up everyone and the game would look completely different.

So this Sunday, if you’re watching Super Bowl LI and it feels dead inside of NRG Stadium, don’t blame the fans who were given tickets by one of the NFL’s corporate sponsors, blame the league for not making sure even more tickets went to the craziest fans.