We Went Full-Throttle at a Flat Track Motorcycle Race, The Rawest Sport on Two Wheels 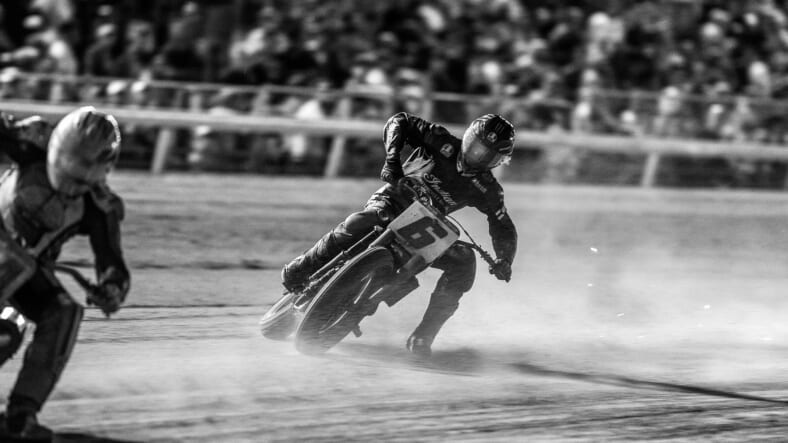 It’s a blistering hot Saturday afternoon — hovering around triple digits — and thousands of fans are streaming into Remington Park, a horseracing track and casino in Oklahoma City.

But the only horses here today are of the two-wheeled, motorized variety, as the American Flat Track Series has rolled into town for the eighth race of the season, the OKC Mile.The oldest form of motorcycle racing in the U.S., Flat Track is neither the high-speed technical chess match of Superbikes nor the high-flying acrobatics of Supercross. It’s just bikes ripping around a dirt-covered oval at speeds of up to 140 mph. And it’s as real and raw as racing gets.

Half the fun of a Flat Track race is a visit to the pits, and the spontaneous-combustion conditions haven’t deterred fans from doing so. The pits are not, as they are at MotoGP races, tucked along the track and accessible only to those fortunate enough to have scored a media credential or VIP passes. Here, they’re set up in the parking lot and, after 4:30 p.m., they’re open to everyone.

There are vans, trucks, and trailers. Tents are slathered with sponsors like Carver BBQ, Sour Punch candy and McElroy Packaging. The teams range from humble, two-man privateer shops to a pair of multi-million dollar factory operations.

And the racing faithful — with their sunglasses and beer koozies and t-shirts from the Flat Track bastions of Sturgis and Springfield and Sacramento — love the chance to get up close and personal with their favorite teams and riders.

The longest line of fans (across from the tent that reads “In Throttle We Trust”) cues up for the Indian Motorcycle racing team. The trio of Jared “Jammer” Mees, “Flyin’” Bryan Smith, and Brad “The Bullet” Baker are known officially as The Wrecking Crew, but could easily be called The Dream Team…or maybe even the Golden State Warriors of Flat Track. When Indian announced its return to flat track racing for the 2017 season, they hoped to land a quality rider or two. Instead they got the three best, with a combined five Grand National Flat Track championships between them, not to mention a pair of X-Games gold medals and a couple of Superprestigio wins. There were, understandably, some reservations. “Indian was gonna design a bike without any clue yet about racing?” says Smith, when he heard of Indian’s return to flat track after a 54-year absence. “I was nervous until I rode the bike. I knew right away it was a good, and my team would make it very good.”

The Flat Track disciples bring shirts, hats, stickers, and posters for the riders to sign. At 24, Baker is the youngest of Wrecking Crew, but he wields a silver Sharpie and meets-and-greets with as much aplomb as his older teammates.

“Arm’s done up pretty good,” says a silver-haired fan who points to a pair of six-inch long scars on Baker’s left forearm. “Broke two different times in 2014,” says Baker. Not to mention his humerus, collarbone, tibia, wrist and three fingers. “Comes with the job.”

A towering dude with a thick Oklahoma accent steps up to the table. “Howdy Brad!” says the middle-aged gearhead with a farmer tan. “How’s the Indian running?” By “the Indian” he means the Indian Scout FTR750, the 750cc, liquid-cooled V-Twin with the four speed-transmission and adjustable chassis for varying track conditions.

It’s the most recent incarnation of the iconic Scout line that holds a long and storied place in Indian’s history. The Scout was the original Flat Track bike used at the turn of the 20th century. Burt Munro ran a modified streamlined Scout when he set his historic land-speed record at Bonneville in 1967. And today, the Scout and Scout Sixty models continue to serve as two of Indian’s most versatile and popular bikes at retail.

That latest Indian? Well, it’s an absolute beast designed by the engineers at Polaris, Indian’s parent company. You can hear it when the bike fires up; it’s a thunderous sound, a guttural growling. It’s the sound of domination.

Atop the FTR750, a bike that was birthed less than a year before the start of the 2017 season, the Wrecking Crew has surpassed the wildest dreams of its creators. “Before the season started, I wrote down what I expected as far as results,” says Gary Gray, Indian Product manager and team manager. “I thought we’d finish on the podium three times and finish in the top five in points for the season.” Instead, the Wrecking Crew has won each of the first seven races (Mees three times, Smith four). They’ve claimed two podium places in every race. Going into the OKC Mile, Mees and Smith were tied for the series lead with 152 with Baker a not-too-distant 4th.

In addition to surprising the hell out of everyone, Indian and the Wrecking Crew have decimated their longtime arch nemesis: Harley Davidson. See, for the half of the 20th century, the Indian-Harley rivalry was as fierce as any in sports, a la Yankees/Red Sox, Celtics/Lakers, and even Ali/Frazier. When Flat Track racing took hold in the 1930s — it was sanctioned by the American Motorcycle Association in 1932 — fans couldn’t get enough. It was pure, visceral racing on the edge. Dirt flying, bikes getting sideways, riders inches away from the railing, the walls, and each other. In other words, not so different than it is today.“You might have to have a couple of screws loose to do this at the top level,” says Baker with a grin.

By 1946, the inaugural Grand National Champions series was all about the Big Two: Harley and Indian. The manufacturers fought back and forth for glory until The Original Indian Wrecking Crew — Bill Tuman, Bobby Hill, and Ernie Beckman — won three consecutive Grand National Championships in 1951-1953. Yet just as they were establishing themselves as one of the all-time great race teams, financial strain forced Indian to fold. The dream was over.

Then, in 2011, Minnesota-based manufacturer Polaris Industries bought Indian Motorcycle and began the process of reviving one of America’s most iconic motorcycle brands.

Over the next few years, a succession of badass bikes began rolling off the assembly line: The Chief Classic. The Dark Horse. The Scout Sixty. Then, in 2016, to the delight of race fans around the world, Polaris President of Motorcycles Steve Menneto made an announcement: Indian was returning to Flat Track.

But here at Remington Park, and every other track on the 2017 circuit, it’s as if Indian never left the sport. The Harley and Indian rivalry lives again with shirts, hats, vests, bikes and trash talk separating the two camps. Although real animosity isn’t a worry these days.

A group of fiftysomething bikers roams the grounds together, half wearing Indian gear, the others Harley. “We like to argue about who’s better,” says one of the men. “But it’s for fun. We all just love bikes and racing.”

And a little after 10 pm, after the qualifying, the heats, the semis, the singles, the Grand Marshall riding around, the WWII-era plane making passes overhead and the the singing of “The Star Spangled Banner,” there is a race to be had. The grandstands are packed, the benches and tables all filled, and a sea of portable chairs fills the trackside picnic area as the as the riders take their places on the starting lines.

There are Harley XG750R’s, Kawasaki Ninja 650’s, KTM LCB950’s, Yamaha FZ-07’s and of course Indian FTR750’s, all three of which are in the front row (they qualified 1-2-3). The starting light turns yellow. Fans cheer. Purring bikes growl louder. GREEN! A cacophony of engines roar and they’re off.

Living up to his nickname, The Bullet takes the hole shot around the first turn and quickly creates some space between himself and the pack. By the second lap any hopes for a Harley-Indian showdown are vanquished as The Wrecking Crew are in front and not looking back. Three miles later and it’s a three-man race with Baker comfortably ahead.

But on lap 17 Baker catches up to the slower riders, and the traffic bogs him down. With five miles remaining, Mees is breathing down The Bullet’s neck. On the second to last lap, Mees makes his move and passes Baker. Yet Baker returns the favor and retakes the lead. The crowd cheers and gasps as the two riders battle like a pair of heavyweight brawlers.

Inches apart, they pass, try to pass, pass again. On the last lap Baker takes a turn too hot and slides wide. The seasoned and savvy Mees sees the mistake and flies past. The knockout punch. With his 24 career Grand National checkered flag, he denies Baker his inaugural win of 2017.

On the podium The Bullet takes it all in stride. “I was hoping Jared was going to have as much trouble as I did,” said Baker, referring to passing the slower bikes. “The I heard someone behind on the last lap right behind me. I’d hoped it was a lapper. It wasn’t.”

“I had a terrible start,” said a beaming Mees. “I had to dig deep for this one.”

The sated crowd files out of Remington Park, still smiling and buzzing about the down-to-the-wire finish. Baker too smiles and he heads back to his trailer through the still-hot night. There’s a lot to look forward to. The season’s not yet halfway over. There’s another race next week in Lima, Ohio.

And he’s riding an Indian.