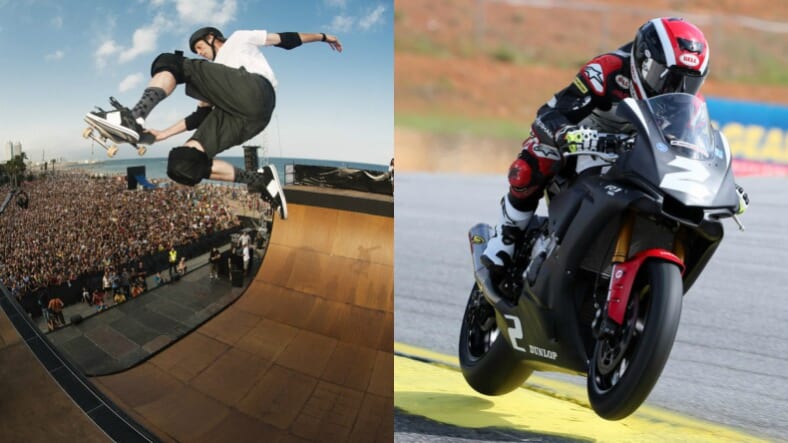 Saturday’s racing saw riders hit speeds of 185 mph on the straights. Returning champion Toni Elias carved out an early lead in the Motul Superbike event, but the Spanish rider was hounded by Yamalube/Westby Racing’s Mathew Scholtz early on. Elias eventually pulled away with the 17th Superbike win of his career by a five-second lead.

Tony Hawk’s five-skater crew—and one lone BMX rider—shredded a vert ramp in amazing shows that took place during the Saturday races. “The Birdman” even found time to take a 160-mph ride on the back of racer Chris Ulrich’s bike.

Hawk graciously paused to chat with fans and friends over the weekend, including one little boy with cancer whose “Make a Wish” request was to see the MotoAmerica races first hand. The brave young man watched from a team paddock on the track, then caught the skater’s aerial aerobatics before shaking the his hand in the Maxim M2 VIP Lounge.

Elias came out on top again, but not without some serious challenges. Second and third place podium winners Matthew Scholtz and Garret Gerloff pushed Elias right to the end in their first Superbike competition.

“For the first proper race in Superbike, it was really nice to be battling up front with Toni (Elias), the defending champion,” Scholtz said. “I learned quite a few things today. I kind of knew from the practice sessions that I could run the pace, but I thought around mid-race that we’d start going a little slower. That didn’t happen until, maybe lap 14 or 15, which was quite a surprise.”

Fans, racers and the press all reported that Atlanta was the best racing event they’ve ever attended. And it’s only getting better from here.

The next MotoAmerica championship is on the Virginia/North Carolina border May 4-6, and Maxim will be there once again to host a post-race concert featuring High Valley, Chase Bryant, Larkin Poe and Annie Bosko. Over 1300 acres of rolling hills serve as the perfect spot to set up shop and throw an action-packed party all weekend long.

If you want the full experience, treat yourself to VIP Full Throttle ticket packages that include entrance to the incredible M2 Lounge — luxury suites and stages that deliver the ultimate viewing experience for all the action.

Besides complimentary food and drink, enjoy meet-and-greets with riders and Maxim hostesses, escorted pit lane access, and a chance to walk the track and see first-hand the twists and curves that make MotoAmerica one of the world’s most exciting new sports—all for $399 for the two-day experience.