Diaz is coming off a decision loss to Leon Edwards that provided the most exciting moments of UFC 263. 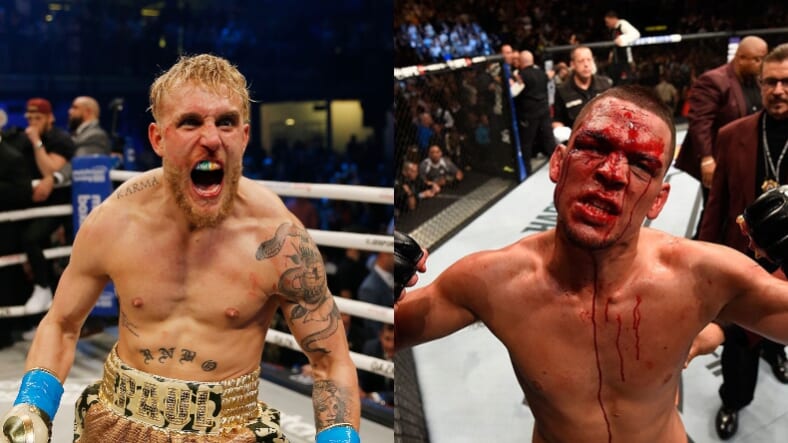 Jake Paul apparently wants to fight Nate Diaz after he steps in the ring with ex-UFC champion Tyron Woodley in a Showtime pay-per-view event.

Diaz lost by unanimous decision to Leon Edwards at UFC 263 in the MMA promotion’s first five-round, non-title, non-main event fight. Though Diaz was clearly losing by round five, he uncorked a left hand that severely wobbled Edwards in the fight’s final seconds.

Nate Diaz had Leon Edwards stumbling for a second 👀

What a wild final minute‼️

Paul used the hype surrounding Diaz and Edwards’ savage performances to drum up drama, tweeting, “I will knockout Nate Diaz after I knockout Woodley.”

I will knockout Nate Diaz after I knockout Woodley

Yahoo Sports reports that Paul had previously predicted that Diaz would get KO-ed by Edwards in the third round. The famously tough welterweight has only been truly stopped by strikes on one occasion in his 16-year-long career, against Josh Thomson in 2013. As Sportskeeda notes, Diaz’s loss to Jorge Masvidal was also ruled a TKO on paper after a doctor called for stoppage.

While he stoked the fire with Diaz, Paul was complimentary of the co-main event winner and new flyweight titleholder Brandon Moreno, who submitted Deiveson Figueiredo in the third round.

Viva Mexico…..Moreno is a star! Hope he gets paid like it💰

“Viva Mexico…..Moreno is a star! Hope he gets paid like it,” Paul tweeted. He’s been critical of UFC President Dana White’s fighter pay policies on several occasions.

Before anything, Paul will face Woodley in a 190-pound pro boxing bout slated for August 28, 2021.

“As I enter my fourth pro fight, I am excited to knock the first one off the list by challenging myself against a five-time UFC champion known for his knockout power, Paul said. “Tyron’s a seasoned striker who has fought the best in the world. I certainly respect his career, but I will be sending Tyron into a permanent siesta on August 28.”

“Basically, they brought me in to take out the trash. I can’t wait to shut this bitch up. This is getting done for the culture, the whole MMA community and boxing community, to rid this guy of combat sports.”