“Anything is possible after my brother fought Floyd Mayweather. I could fight anybody after this.” 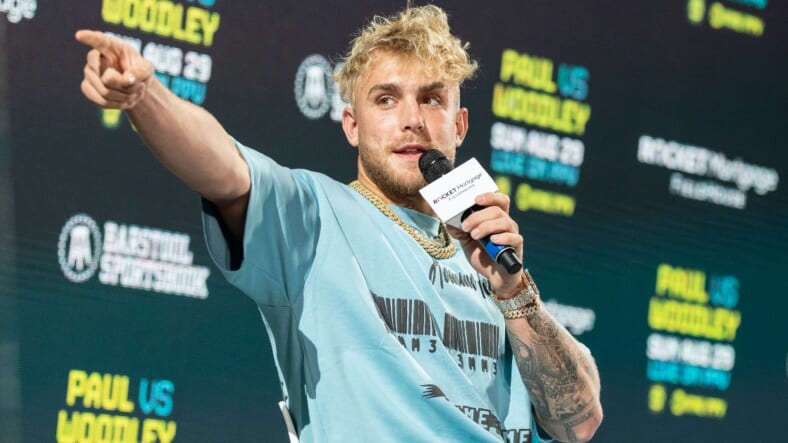 Jake Paul has always had a soft spot for “The Sweet Science.”

Long before the 24-year-old Ohioan earned his 20 million YouTube subscribers, long before he appeared on the Disney Channel series Bizaardvark, long before his content generated 2 billion views on the defunct social media platform Vine, he was watching boxing. Lots of it—and some old UFC fights—with his father. He even attended a local MMA show when he was about nine, and fondly remembers everything from the walkouts to the knockouts.

It wasn’t until Jake and his brother Logan Paul, also a social media superstar-turned boxing attraction, were called out by two rival YouTubers—KSI and Deji—that he ever thought about strapping on the gloves himself.

“There were two YouTubers that wanted to fight my brother and I, and we learned to fight in a period of like six months thereafter,” Paul tells Maxim.com, looking back on his 2018 amateur boxing debut.

“Everyone wanted to see the Paul brothers lose, so we hired a professional boxing coach and took on these two YouTubers. It became the biggest amateur boxing event in history—which is kind of hilarious—and that’s kind of where it started.”

That’s where it started for Paul, but not where it ended.

Since bombing Deji in front of millions of crazed teenagers, Paul has dedicated his life to boxing, relocating to the swelter of Puerto Rico with the explicit purpose of escaping the distractions of Los Angeles and learning to fight.

The results of that commitment are apparent: In the last two years, Paul has earned a trio of violent knockout victories over YouTuber AnEsonGib, former NBA star Nate Robinson, and former UFC welterweight contender Ben Askren—all in professional bouts.

On August 29, he’ll look to extend his highlight reel at the expense of former UFC welterweight champion Tyron Woodley.

Woodley, 39, is widely regarded as one of the best 170-pounders in MMA history, revered both for his wrestling and his cage-rattling knockout power. The former champ lost his last four MMA bouts, but Paul feels his adversary is as lethal as ever.

“He’s very, very dangerous,” Paul said. “The power always stays. We’ve seen it with Mike Tyson at [almost] 60 years old. He’s hitting heavy bags and knocking them off the chains. Tyron Woodley is still explosive and people forget in his last fight, he had Vicente Luque stumbling and wobbling across the cage [before he lost].

“People can say whatever they want, but Tyron’s been boxing and striking five times as long as I have. This is a big challenge for me and I know that going into it. We’re not taking this fight lightly at all.”

If Paul is able to defeat Woodley, he’ll begin the hunt for another opponent with a suitable blend of skill and celebrity. He’s not sure who that opponent will be, but remains hopeful that he’ll one day share the ring with struggling former two-division UFC champion Conor McGregor.

“I’m sort of thinking about it one fight at a time,” he said. “Anything is possible after my brother fought Floyd Mayweather. I could fight anybody after this.

“I think there’s a 90 percent chance of [the McGregor fight] happening. That’s the biggest fight that Conor can do. It’d be the biggest payday for him.”

Paul has also brazenly set his sights on Saul “Canelo” Alvarez, the biggest star in boxing today, and one of the sport’s pound-for-pound kings. He admits that potential megafight is likely some distance away—three years is the timeframe he’s envisioning—but is confident he’ll have the size and ultimately the skill to topple the Mexican juggernaut.

“I’m very confident,” he said of a fight with Canelo. “He’s a killer at 168 pounds, but people forget that I naturally walk around at about 205, so there’s a big weight difference. There’s a big height advantage.

“Canelo hasn’t fought someone who has really challenged him in the last couple of fights,” he added. “They’ve all been easy guys who just sort of fall on their ass.

“I just need to continue on the path that I’m on now: Getting experience under my belt, fighting tougher and tougher people as my career goes on, continuing to stay in the gym every single day, and continuing to be the pay-per-view star that I am and selling tens of millions of dollars in pay-per-views. At the end of the day, this is a business. If Canelo sees that, he’s going to want to get in on the business.”

Paul’s calls for fights with stars like McGregor and Canelo have not gone over well with fight fans, who call him arrogant, deluded, and much worse. Recently, however, he’s shown a new side of his character—and it’s one that some fans and even some fighters seem to be taking a shine to: The hyperconfident YouTube transplant has been talking to every journalist and social media follower who will listen about the problems with the way professional fighters are paid—particularly fighters in the UFC.

“Recently this study came out from Goldman-Sachs, saying the UFC only pays fighters 10 percent of the UFC’s total earnings, whereas in other leagues like the NBA, the NFL, the players get paid 50 percent,” Paul said.

“That’s a crazy, massive difference, and in the NBA, you’re not risking your life. You can die in the ring. That’s how I see it. It’s so backwards. There’s a problem that needs to be fixed here. It’s a monopoly that the UFC is running. They basically sign these fighters to career-long contracts, and they have no other choice, and they’re just bound to oblige and be a puppet.”

Fans will probably always be divided on Jake Paul. Some will come around when they see his dedication to the sport of boxing or when they hear him go to bat for fighters in the UFC and elsewhere. Others will remain repelled by his bravado, his showmanship, his fast-track to the top of the boxing world.

Paul is resigned to the fact that he won’t win over everyone, but as he prepares to take on a former UFC champion in just his fourth professional fight, he seems hopeful that people will come to see him the way he seems himself: as a lifelong fight fan with an appetite for challenges and the resources to make those challenges happen.

“I know where they’re coming from,” he said of his naysayers. “I really do. People want me to go out there and fight Anthony Joshua and get knocked out. That’s what they want to see. They don’t want to see me slowly challenge myself. Everyone wants instant gratification these days.

“No one was even watching them in their fourth fights. There’s added pressure on me because of my name and celebrity coming into this sport, but I like it. Pressure creates diamonds. I’m just going to continue to challenge myself.

“I’m going up against a five-time UFC champion known for his knockout power. I don’t know what more people could want from me.”