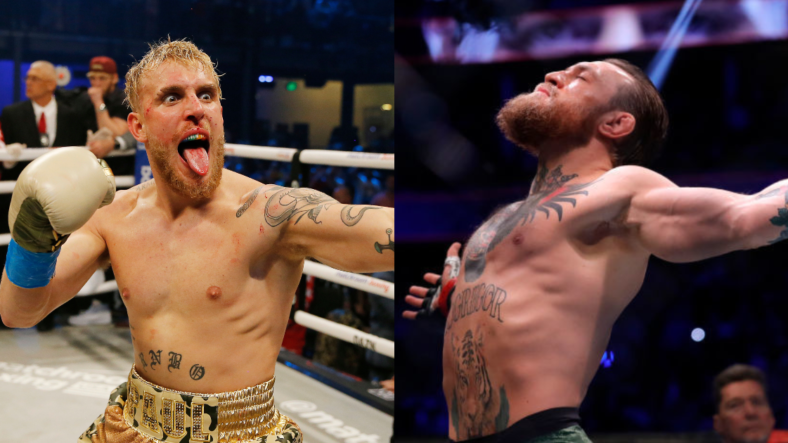 Jake Paul just proved he can dominate a world-class athlete in the ring with a first-round knockout of former UFC fighter and ONE champ Ben Askren. Now he’s targeting one of the biggest names in combat sports history: Conor McGregor.

The social media star and blossoming boxer has flirted with the idea of taking on the Irish brawler for months now.

After he savagely knocked out ex-New York Knick Nate Robinson, he challenged McGregor to a $50 million bout in an outlandishly disrespectful Instagram video. Now that he’s handily beaten a real mixed martial artist, he believes the McGregor fight is closer to fruition.

“Honestly, when it comes down to signing the contract, these guys duck. Honestly, we’ll see,” Paul said in post-match interview, per Bro Bible. “The McGregor fight just became more realistic, like I’ve been saying. I just want to do big fights.”

“Ben Askren was a step up,” he said. “OK, look what happened (in) 1:59. We’ll see who the next big challenge is. I don’t want to take some bullsh*t sh*t. I want to challenge myself. I want to do 3 million, 4 million pay-per-view buys. Who’s going to bring in those numbers?”

McGregor is paying attention. According to Sport Bible, he recently said he’s “certainly a viewer” of YouTube boxing scene.

“If they are fighting well then it can’t make a mockery of fighting. They’re getting in and competing. I am not so much against it,” he said in reference to the Mike Tyson/Roy Jones Jr. card, which included Paul vs. Robinson.

“What I will say though is the numbers that that show calculated was a Mike Tyson fight. You had an icon fighting as well as Roy Jones Jnr, two GOATs [greatest of all time] of combat sports.
And then you had the YouTube kid and NBA star competing underneath that. So they done good business.”

If not McGregor, Paul also briefly called out Nate Diaz on Twitter, predicting a third-round KO of the rugged UFC veteran.

Whether he’s ready to handle serious UFC strikers is up for debate, but one thing’s for sure: Paul is a seriously talented self promoter.