Plus: Mike Ditka weighs in with the worst take of them all. 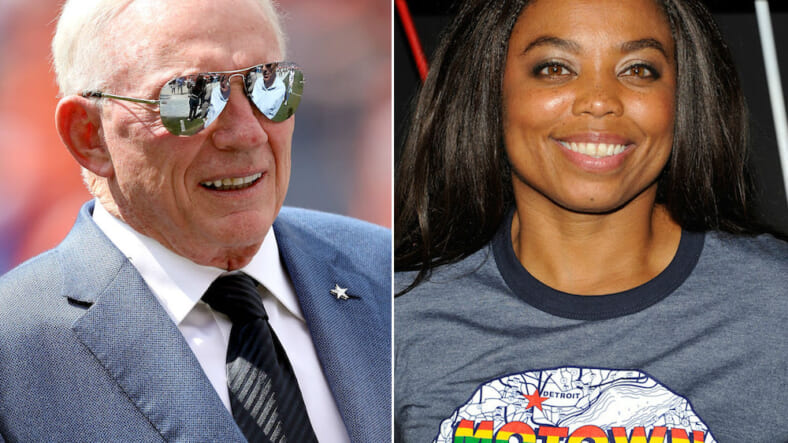 ESPN anchor Jemele Hill was suspended Monday by the Worldwide Leader in Sports for her second violation of the network’s social media policy. Hill’s offending tweets, which weren’t very offensive, came in response to Dallas Cowboys owner Jerry Jones saying that he would bench any player who protests during the national anthem.

On Twitter, Hill said fans who disagree with Jones should hit him where it hurts—his giant leather wallet.

This play always work. Change happens when advertisers are impacted. If you feel strongly about JJ's statement, boycott his advertisers. https://t.co/LFXJ9YQe74

If you strongly reject what Jerry Jones said, the key is his advertisers. Don't place the burden squarely on the players. https://t.co/Gc48kchkuv

Just so we're clear: I'm not advocating a NFL boycott. But an unfair burden has been put on players in Dallas & Miami w/ anthem directives.

Just weeks after Hill was reprimanded by the network for calling President Trump a “white supremacist” on Twitter, these tweets were deemed suspension-worthy. She will not appear on the network for the next two weeks.

“[Hill] previously acknowledged letting her colleagues and company down with an impulsive tweet,” ESPN said in a statement, referencing Hill’s apology after the Trump tweets.

“In the aftermath, all employees were reminded of how individual tweets may reflect negatively on ESPN and that such actions would have consequences,” the statement continued. “Hence this decision.”

President Trump weighed in on Hill’s suspension in an early morning tweet on Tuesday, which suggested that the anchor was harming the network’s ratings.

To his credit, Ditka recognized that the protests have nothing to do with the military and are not targeting the flag. Rather, as 49ers safety Eric Reid recently wrote in a New York Times op-ed, they’re about NFL players using their platform “to speak for those who are voiceless” on issues such as “systemic oppression against people of color, police brutality and the criminal justice system.”

Ditka knows what they’re protesting but he thinks it’s nonsense. In an interview Monday, he questioned the need to protest inequality in a country where “if you want to work, if you want to try, if you want to put effort into yourself… you can accomplish anything.”

“I mean, I don’t see all this, the social injustice that some of these people see. I don’t,’ he added.

Ditka wasn’t arguing that there’s never been “social injustice” in the U.S., but he said it’s been a long time since he’s seen it.

“There has been no oppression in the last 100 years that I know of,” said Ditka, who was 25 years old with the Civil Rights Act of 1964 outlawed discrimination based on race.