She’s a model, beauty queen and star of “Attack of the 50 Foot Cheerleader”–and Joe Buck still managed to ruin her victory smooch with Koepka. 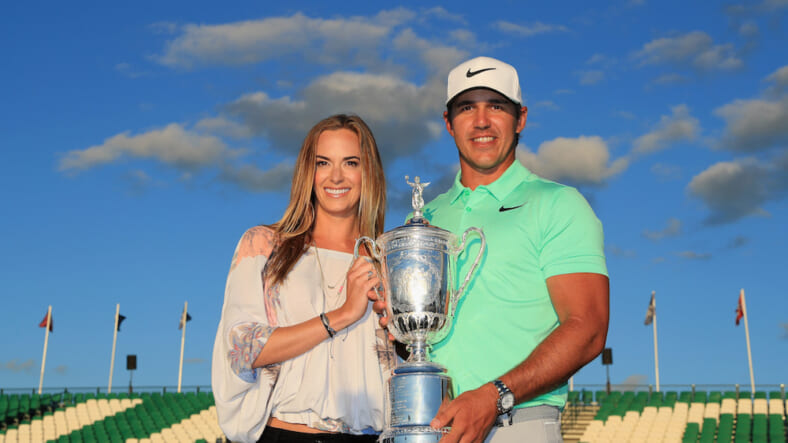 You’d be excused for missing the U.S. Open this weekend. Yes, it was Father’s Day, but that doesn’t mean you had to watch golf with your dad.

If you did catch the final round at Erin Hills, you would have witnessed a knockout performance from Brooks Koepka, the 27-year-old phenom from Florida who took home his first major on Sunday. You also would have been introduced to his knockout of a girlfriend, Jena Sims.

The model and actress was thrust into the spotlight immediately after her man won the tournament, thanks to a helluva blunder by Fox broadcaster Joe Buck, who identified her as Becky Edwards, Koepka’s ex, and then was corrected on air.  Peep the video here:

Fox shame, Joe Buck. Koepka and Edwards broke up. He’s dating Sims now. If anyone should know that, it’s the guy doing play-by-play on the U.S. Open.

It’s unclear how long these two have been going at it, but Sims looks to be smitten.

The 28-year-old is a Georgia native who was crowned  Miss Junior National Teenager in 2005. In the decade plus since, she’s been modeling and acting in shows like Entourage, Dexter and yes, Sharknado.

Her first big screen credit was in the cornball b-movie homage Attack of the 50 Ft. Cheerleader. Here’s one choice scene from the somehow-not-Oscar-winning film.

By the looks of her Instagram page, Sims is a huge sports fan. Football, basketball, bowling and swimming—it’s all there. Plus plenty of eye candy shots, too: