New Details Emerge In Jerry Jones’ Feud With Roger Goodell: ‘I’m Gonna Come After You With Everything I Have’

Video of Jones making a racially-charged statement has also surfaced. 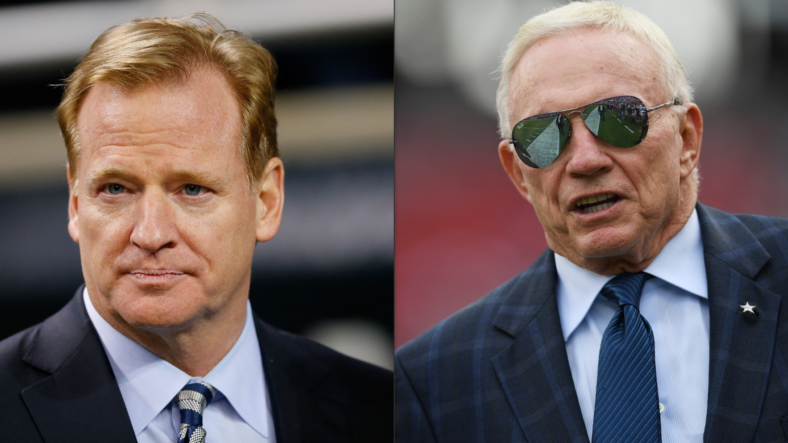 Dallas Cowboys owner Jerry Jones has catapulted himself to the forefront of a power struggle between NFL shareholders and commissioner Roger Goodell.

According to ESPN, the 75 year old lambasted Goodell after learning of Cowboys running back Ezekiel Elliot’s six-game suspension.

“I’m gonna come after you with everything I have,” he told Goodell over the phone in August. “If you think Bob Kraft came after you hard, Bob Kraft is a pussy compared to what I’m going to do.”

Jones still privately believed, based on promises by Goodell — which the league says were never made — that Elliott would never be suspended. When that happened, Goodell lost one of his key supporters and sent the league into anarchy.

Now The Blast has obtained video of the brash businessman making a racially-charged comment to a fan.

The man recording asks Jones to congratulate his fiance on their recent engagement. This is what he came up with:

“Jennifer, congratulations on the wedding,” he says. “Now, you know he’s with a black girl tonight, don’t you?”

The video was shot in 2013, but the source reportedly decided to share the video because he felt it was important for NFL fans to see.

We have a feeling this is gonna get a lot worse before it gets any better.