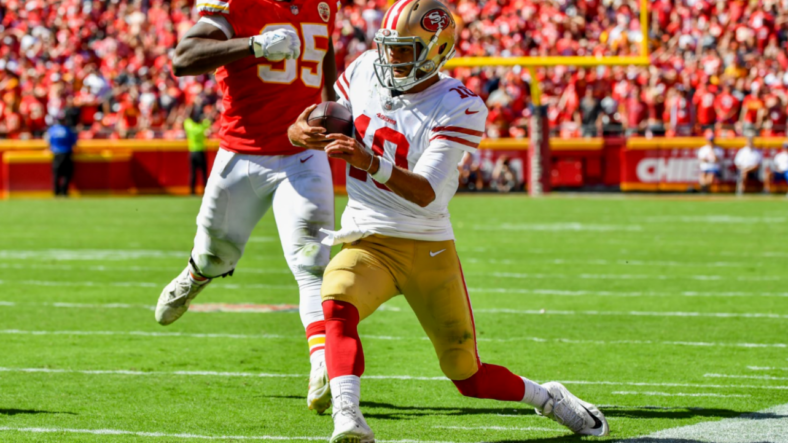 San Francisco 49ers quarterback Jimmy Garoppolo is likely out for the rest of the season… and his rumored ex-girlfriend is all smiles.

Garoppolo was carted off the field after injuring his knee in a running play against the Kansas City Chiefs on Sunday. You can see his leg buckle in the video below:

Jimmy Garoppolo scrambles on third down and takes a big hit before he can get out of bounds. He’s injured on the play. #49ers #SFvsKC pic.twitter.com/yYlrg9haTO

Alexandra King’s response to Garoppolo’s devastating injury and the 49ers’ 27-38 loss was ice cold. The same woman who called the 26-year-old NFL star her “Valentine” back in February reportedly posted the word “Karma” and a smiley face emoji to her Instagram Story. Harsh!

#49ers QB Jimmy Garoppolo has, in fact, torn his ACL, the team is announcing. The MRI confirmed what coach Kyle Shanahan feared yesterday. He’s out for the season.

MRI showed what 49ers feared: Jimmy Garoppolo tore his ACL and his season is over, per source.

“I feel terrible for him,” Brady said during an interview on WEEI’s Kirck and Callahan radio show. “It’s a tough injury. I feel bad for Jimmy, and it’s football. Things happen like that. I’ve been through an ACL. It just sucks.”

Garoppolo helped win two Super Bowls alongside the superstar Patriots signal caller. He was traded to the 49ers in 2017 and signed a record-breaking $137.5 million contract with the team last February.

“You hate to see people go down, and (Jimmy) is someone I really like and have been friends with since the day he got here,” Brady added. “It just sucks to have to go through that.”

It was rumored that King was none to pleased with Garoppolo after his well-publicized date with adult star Kara Mia.

In any event, we hope the injured QB gets well soon. And while her revenge ‘gram wasn’t the nicest thing to say, at least King has a few that are definitely less mean-spirited: