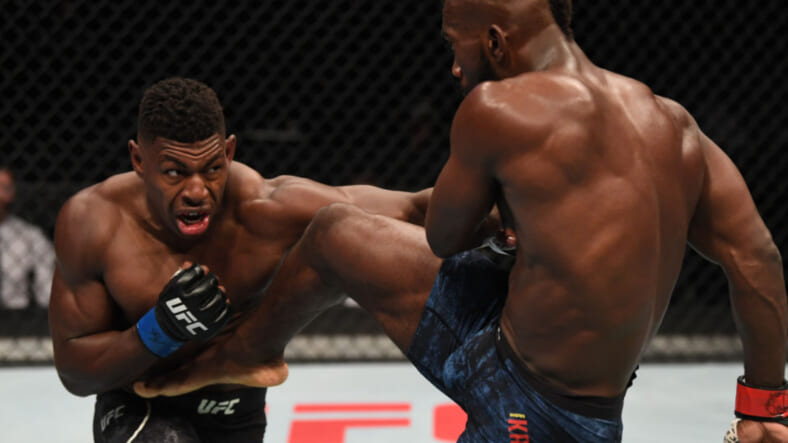 On UFC‘s Fight Island (Yas Island in Dubai) Saturday, Joaquin Buckley squared off against Impa Kasanganay in a middleweight bout. This is how you get $50,000 for knocking an opponent out cold and looking like a ninja in the bargain.

The spectacular knockdown happened in round 2. Buckley came in with a high kick that Kasanganay ably blocked and held. Then they entered The Matrix for a moment as Buckley leveraged his opponent’s tight hold on one leg to pivot and deliver a gracefully brutal spinning heel kick for the ages.

As seen in the video, the blow flattened Kasanganay. Lights out.

Go all angles on @NewMansa94's masterpiece 😳

Analyst Paul Felder dubbed it “the greatest KO I’ve seen ever” and the fighters’ colleagues in the UFC quickly tweeted their admiration for the move.

Sherdog.com reports Buckley did receive a $50,000 bonus for the spectacular move.

Much respect you sir @marcgoddard_uk ! Thank you I love what I get to do. Came to fight left of my shield. God bless you and I appreciate your message. I hope to see you soon 💪🏿 Definitely Huge congrats on a such game shot @Newmansa94 way to fight. https://t.co/zSHkdrNhXw

It’s not the kind of move that anyone could easily reproduce, but it would be shocking if there weren’t several more attempts in UFC matches to come.