The Sixers star has a history with the Ball family. 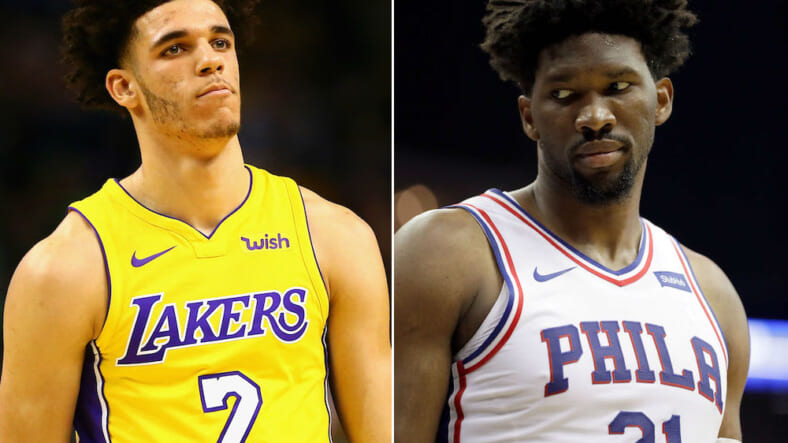 Sixers center Joel Embiid played the best game of his career on Wednesday night when he dropped 46 points on the hapless Lakers. It wasn’t just a personal best though; Embiid made history. Embiid’s stat line—46 points, 15 rebounds, seven assists and seven blocks—has never been reached in NBA history.

As on fire as he was on the court though, it doesn’t match what he did online after the game. In a seemingly innocuous Instagram post, Embiid managed to shit on entire Ball family, including Lakers rookie guard Lonzo and his loud mouthed dad Lavar.

It’s a subtle shot, but look up there at the location of that Instagram. It’s Lavar, Iran, which is not where Embiid was when he posted it. And then look a little lower and you’ll see that it’s the younger Ball who’s getting scored on in the photo.

Embiid has a bit of a history with the Ball family, going back to earlier this summer when he mocked Lonzo and Lavar in a tweet to his teammate Ben Simmons on draft night.

Please dunk on him so hard that his daddy runs on the court to save him.. https://t.co/cMvt5RYiSQ

Lavar was asked about this while appearing on a Philly radio station and was having none of it.

“When you don’t win, and don’t even make the playoffs, and don’t even stay on the court long enough, that’s the best thing you can do – is tweet and make some stuff,” Ball said. “Ain’t nobody else doing that, because they’re working on their games in the gym. These guys ain’t played a game, [are] always hurt, and [are] at the bottom of the totem pole. So guess what? Get your [rear ends] off the goddamn Tweeter, and get in the gym.”

Embiid did not take kindly to that criticism.

And then Lavar fired back. “He’s not intelligent at all. He’s worried about me? He should be worrying about playing,” he told TMZ.

And it appears Embiid was. The 23-year-old is currently averaging a double-double and the young Sixers have jumped out to an 8-6 record behind him and Simmons. And then Wednesday night, he put up a historic stat line as Lavar’s son had as many points as turnovers—two.

But Embiid was not out to embarrass Lonzo. At least that what he said on Twitter today.

I like Lonzo’s game… no shots towards him #TrustIt

We eagerly away Lavar’s response.