Joel Embiid Returned to the Sixers With a Freaky Face Mask, and NBA Fans Have Opinions

Twitter is lighting up “The Process” with jokes about his weird ass mask. 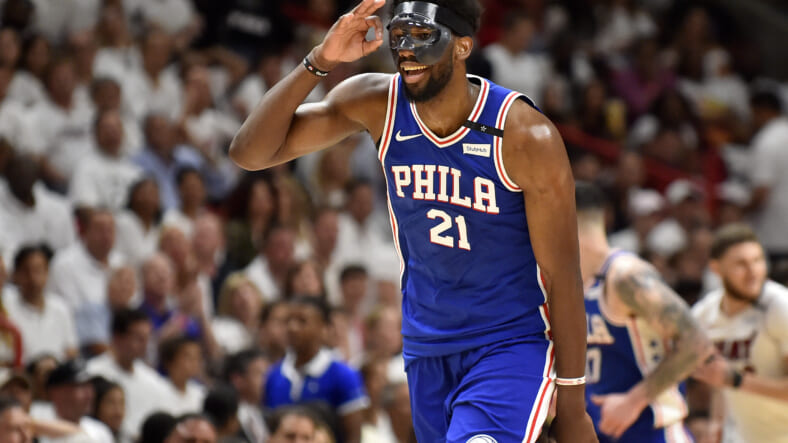 Joel Embiid is back, and he’s wearing a mask.

On Thursday night, the Philadelphia 76ers big man played in his first game since breaking his face and suffering a concussion in late March. The Sixers were glad to have him. After going 52-30 in the regular season thanks to Embiid’s 22.9 points and 11 rebounds per game, the team was 1-1 in the two playoff games that he missed.

On Thursday, Embiid returned with a vengeance, stuffing the stat sheet with 23 points, seven boards, three blocks and four assists in the 30 minutes played. His team won 128-108 in a blow out.

Let’s be real though, the best part about having Embiid back was not his smooth three point stroke or his intimidating defensive presence—it was that wild-ass mask.

“There are just two of [these masks]. It took them 20 iterations to get to this one,” she noted. “A couple of things: This is incredibly light. Now you see it’s a little big darker in color, that’s a carbon, which makes it even stronger than plastic.

“And then interestingly enough, there’s a cover over the eyes. That’s to protect the orbital bone. So the Sixers are confident that there’s no way he can go out there and re-injure the eye. But you’ve got to wonder how comfortable it will be to play with this all night long.”

Ever the cut up, Embiid had jokes about the mask, making a Phantom of the Opera quip on Instagram.

Soon, every other NBA fan online followed suit with jokes of their own.

"You merely adopted the injury report I was born in it, molded by it. I didn't see the court until I was already a man." pic.twitter.com/xGqaOR4QNT

Embiid and the Sixers will be back on the court Saturday for game four against the Heat.