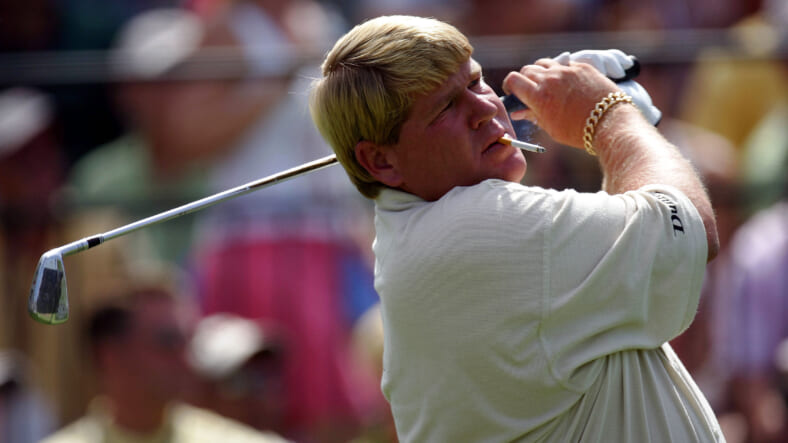 Everyone’s favorite funny pants-wearing, cigarette-smoking, personal life-destroying golfer is back in the news this week. And no, John Daly is not dead. The 50-year-old known variously as “Wild Thing” and “Long John” recently appeared on the Dan Le Batard Show and told a story that began with him winning $55,000 at a casino and ended with him losing $55,000 out of a car window while fighting with his wife.

I won like 55 grand in the casino, and I said, … If you are going to yell and scream at me about this, I threw it over the bridge going over to Memphis from Arkansas. Threw all the money out the window and said, ‘You know what? If you want that money, you can go find it. But let me tell you something: You don’t have a job. You’re not working. I’m supporting you. I’m paying all the bills.’

Out of the mouth of most golfers, that story would not be easily believed. But out of Daly’s it’s clearly true. And it’s not even close to the craziest thing we’ve ever heard about the the famously out of control duffer. What is? Glad you asked.

Here are 11 of the most ridiculous stories involving golf’s most outrageous character.

1. No shoes, no shirt, but a cigaretteIn 2008, Daly was eager to show off a golf course in Branson, Missouri that bears his name. But John Daly’s Murder Rock Golf and Country Club was not the only thing he’d show off to the local TV crew that caught up with him on a warm April day. He’d also show off his massive gut. Daly played a round with a local TV reporter without his shoes or his shirt. It was enough to get called out by the head of the PGA, not that Daly cared.

2. He passed out at HootersAt one of the low points of Daly’s alcoholism, he was found passed out drunk at a Hooters in Winston-Salem, N.C. Because he refused to go to the hospital and had no ride home, Daly was forced to spend a night in jail until he sobered up. That resulted in this.

3. Winging his club into Lake Michigan

4. He pulled off a beer can tee-shotIf ever there was a real-life Happy Gilmore, Daly is obviously him and that may have never been more true than in the moment he did this.

Or maybe it was this.

6. He has topless female fansWhen you’ve got the reputation that Daly does, female fans sometimes show their appreciation by lifting their shirts. And to show his appreciation, Daly will sometimes take his shirt off too.

7. He wears topless pantsIn 2014, Daly showed his admiration for the female form by rocking a pair of brightly covered pants festooned with silhouettes of naked women. They were classy naked women though. The kind you’d see at the beginning of a Bond movie, not the kind you’d tip with singles.

8. This duet with Kid RockDaly and Robert Ritchie, better known as Kid Rock, are good buds who’ve played together at more than one Pro-Am. In 2008, Kid put on a show during the Buick Open pro-am outside Flint, Michigan, playing in a pair of overalls with no shirt underneath. In 2014, Daly made a splash of his own at the AT&T Pebble Beach National Pro-Am, where he wore a pair of pants covered in big dollar bills.

The most entertaining pairing of these two though came in Kid Rock’s arena. After cutting an album of his own in 2002, Daly sang back up on the Kid’s 2007 songs “Half Your Age.” Listen if you dare.

9. He Hit on Miley CyrusHe may be 26 years her senior, but that didn’t stop Daly from letting Miley Cyrus know that he’s a big fan, who happens to enjoy sex.

10. He’s a legendary gamblerDaly’s gambling habit is the stuff of legend. All told, he’s said to have lost between $50 and $60 million in his career, but none of it more dramatically than the $1.65 million he says he lost in Vegas hours after winning $750,000 in a tournament. His game of choice? $5,000 slots.

11. He’s still smokin’Daly’s self-destruction takes on many forms, including smoking. In 2015, after suffering a collapsed lung, Daly sought to ensure fans that he’d be just fine, saying, “I only smoke two packs of cigarettes a day, not three, so I’ll be alright.”