Serena once told Letterman that Andy Murray would beat her 6-0, 6-0 in five minutes. 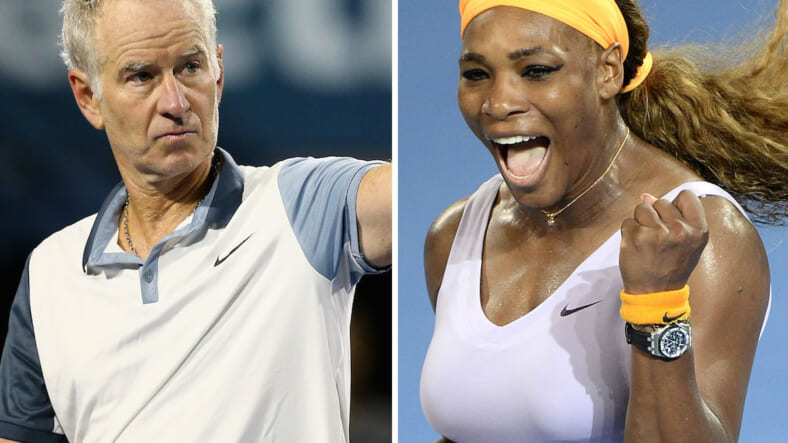 John McEnroe is not going to apologize to Serena Williams. After the former tennis star’s appearance on the Late Show Tuesday night, that much is certain.

Days after saying that Williams would be “like No. 700 in the world” if she were ranked among men, McEnroe was given multiple chances to walk it back by Late Host Stephen Colbert. He took none of the chances.

Despite his clear refusal to back down from his comments, McEnroe extended a bit of an olive branch to Williams. “I wish her the absolute best. She’s the best thing that’s happened to American tennis in the last 10, 15 years,” he said.

Meanwhile, some crack investigators have uncovered a video of Williams appearing on the Late Show back when David Letterman was still sitting in the host’s chair. In the clip she discusses the possibility of playing against Andy Murray and essentially says she’d get smoked.

“If I were to play Andy Murray, I would lose 6-0, 6-0 in five to six minutes, maybe 10 minutes. No, it’s true. It’s a completely different sport. The men are a lot faster and they serve harder, they hit harder, it’s just a different game. I love to play women’s tennis. I only want to play girls, because i don’t want to be embarrassed.”

In some sense, this is a confirmation of what McEnroe has been saying all along—the men’s and women’s games are drastically different. Still, there remains one obvious difference in what they’re saying. Williams is saying one of the best male players in the world could beat her. McEnroe is saying 699 of them could.