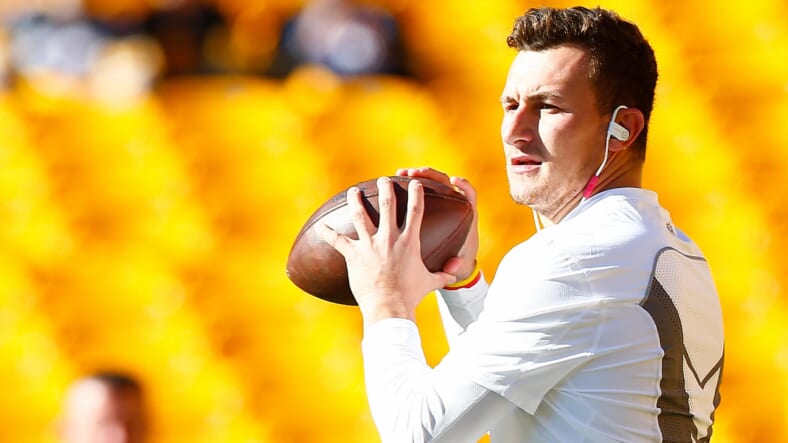 And… by the fourth quarter, he was outta there. Johnny Manziel, a.k.a. Johnny Football, a.k.a. a pretty good object lesson in the saying “don’t do drugs, kids” did not really do that well in his return to pro football.

Sure it was the ex-Browns quarterback’s first major game with the Montreal Alouttes. Having a case of the yips was understandable. That doesn’t change the fact the Hamilton Tiger-Cats stomped the Alouettes, 50-11, and Manziel helped.

Yes, four interceptions. While Manziel made some impressive tackles and did get off one nice long pass, the tackles were on players who’d intercepted him and the pass didn’t move the needle much.

It wasn’t just the interceptions. The one-time Heisman winner also made passes that didn’t make a lot of sense, not really moving the ball downfield, and that’s why the Alouttes were pretty much screwed by half-time, when they were behind, 38-3. ‘

Johnny Manziel's debut did not go as planned. pic.twitter.com/c2qpZf9PSC

Of course this doesn’t mean Manziel is doomed. The Alouettes won’t take him out and strand him in a snow-covered prairie somewhere south of Saskatchewan. It does mean he has a ways to go if he ever wants to remind people why he won that Heisman in the first place.

If the Alouettes do decide Manziel isn’t worth the money or the trouble, at least they’ll be polite about letting him go. He is in Canada, after all.