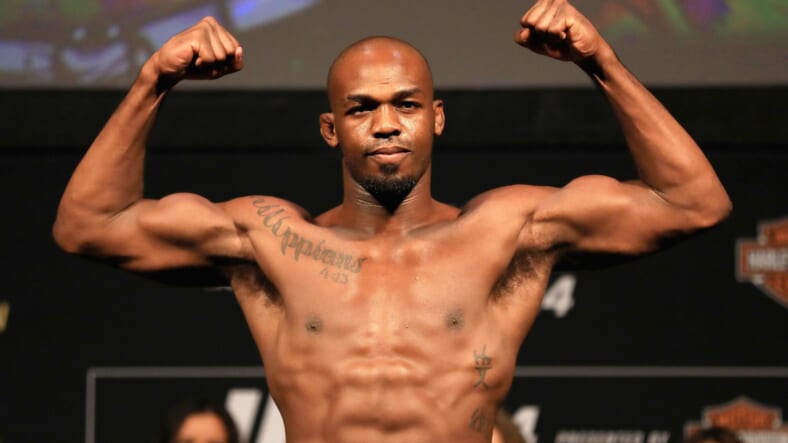 Jon “Bones” Jones can fight in the UFC as early as next month, according to the United States Anti-Doping Agency.

The 22-1 MMA superstar was handed a 15-month suspension Wednesday for failing a drug test submitted on July 28, 2017—the day before he knocked out reigning light heavyweight and heavyweight champ Daniel Cormier at UFC 214. That fight was ruled no contest.

Because USADA’s suspension is retroactive, Jones will be eligible to compete beginning October 28 of this year. ESPN reports that he must also complete three months of community service and pay a $250,000 fine to get back his fight license.

Following the announcement, Jones wrote “my heart is filled with gratitude” and “comeback season begins now” on Twitter.

It’s difficult to express myself at this moment but I can definitely say my heart is filled with gratitude and appreciation. I want to thank all of you who have stood by me during the toughest stretch of my life.

It has meant the world to me and always will. But now is the time to shift the focus front and center to the road ahead. Greatness is what I’m chasing and the path to reclaiming my throne is now officially open. Comeback Season begins now

Responses to the pair of tweets were riddled with Daniel Cormier memes and references to Jones’ past drug use.

Some fans were happy with USADA’s decision…

Congratulations @jonnybones I’m really glad u are back! @dc_mma is aiming for Brock.. so let’s give the fans another legendary fight for the belt 👊🏻 @ufc @danawhite @ Allstars Training… https://t.co/bVhqjxZmLG

Jon jones finally came out from under the octagon at Jacksonwink gym. That’s awesome

…but others seemed disappointed.

UFC gets Jon Jones back. Fans get to see him fight again. He gets a reduced suspension. Now we just have to ignore the sense that all are not treated equally under USADA, and some things here just don't add up. https://t.co/PV7cVH0oq0

Is anyone else not surprised at the Jon Jones USADA result??

The Jon Jones situation is the biggest load of horse shit. Fuck rules, fuck fairness? Fuck USADA, Fuck UFC. This is not a level playing field, this is collusion to protect a top star.

Jones’ supporters would love to see him fight at UFC 230 on November 3 in Madison Square Garden. While president Dana White supported USADA’s decision, he also implied that Jones’ next bout will likely take place in 2019.

“The arbitrator found that Jones never intentionally or knowingly took steroids and the result of the positive test was the result of a contaminated substance,” White told ESPN.

“The science completely supports that finding. The science doesn’t lie, so I look forward to getting him back early next year.”

This is the second time Jones has been suspended for taking banned substances. USADA issued him a one-year suspension in 2016 after he tested positive for two anti-estrogen drugs.

ESPN has further details on Jones’ most recent case:

Despite his claims of innocence, Jones has been unable to account for the substance in his system. He submitted 14 supplements to be tested for possible contamination, none of which came back positive for any banned substance.The details of this case were inconsistent, however, with someone trying to beat a drug test, in that Jones passed five out-of-competition tests in the five months prior to the adverse finding, and presumably would have expected to be tested around his fight at UFC 214.Even though the substance was never accounted for, the circumstances were such that USADA only sought a maximum 18-month suspension. Although it rarely happens, identifying the source of an adverse finding is not a requirement to reduce sanctions under the UFC’s anti-doping program.