“I just see a bitter bitch who’s the size of my dick.” 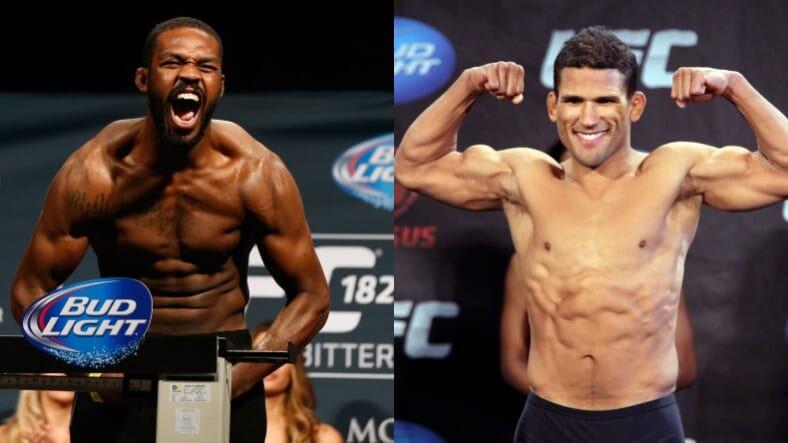 First, a little backstory: Griffin, who went 8-6 in the UFC and has never gotten along with Jones, threw a jab at the MMA legend by snidely comparing his and Conor McGregor’s loss of corporate sponsorship deals.

Jones, considered by many to be among the greatest MMA fighters ever, is also one of the sport’s most tragic and controversial figures. He had his title stripped twice by the UFC. Most recently after his 2017 beatdown of arch-rival Daniel Cormier because of a failed drug test, and also in 2015, after he was arrested for hit-and-run charges in New Mexico.

Even before that, there was drama. Back in 2014, Nike terminated a six-figure contract with Jones because of his media day brawl with Cormier before their first fight. Conor McGregor, meanwhile, may lose his lucrative deal with Burger King deal because of that bonkers attack on a van full of fighters before UFC 223.

Well there goes @TheNotoriousMMA lossing his @BurgerKing deal faster than @JonnyBones lost his @Nike deal!! Or did he?? More💰more problems 🧐🤔

Jones’ response was as brutal as any ass-whupping he’s delivered in the Octagon. After pointing out that Griffin was never good enough to earn a Nike sponsorship deal, he capped off the vicious three-tweet response by likening the ex-lightweight fighter to a “bitter bitch who’s the size of my dick.”

@TysonGriffin my dream was to be sponsored by Nike as a high school wrestler, became an adult and made it happen. Even had my own sneaker which sold out within a day.

@TysonGriffin What ever happened with your Nike deal, I don’t remember. I’ll wait…

@TysonGriffin You can tell by the tone of your tweet that you’re happy Connor may be losing his deal. Disguise yourself as an MMA coach or a MMA personality, I just see a bitter bitch who’s the size of my dick

Griffin then accused Jones of “trying to steal the spotlight” and tweeted private messages he’d received from the fighter two years earlier, in response to other comments Griffin had made about Jones.

I may have took a jab @TheNotoriousMMA during his rampage but just like that man tried to steal the spotlight @JonnyBones is trying to make this all about him and apparently it’s too soon to joke about his nike deal.

2 years ago I kept this private because I almost felt bad for @JonnyBones but now I’ll just let you all judge for yourselves. pic.twitter.com/s4eZfv8M25

Here’s a close-up of those messages, in which Jones belittles Griffin for his net worth, MMA skills and smaller size.

That dramatic DM reveal didn’t faze Jones at all, nor should it have. Truthfully, it only spurred him to mercilessly clown Griffin even harder. Jones doubled down on everything he said privately, adding that believes Griffin to be an “envious little bastard” who he enjoys “shitting on.”

@TysonGriffin It’s hilarious that you reposted our private messages, I meant every word I said. At first I thought your hatred was DC related but now I’m starting to think you are just an envious little bastard.

@TysonGriffin At the end of the day, I’m not going to lie, it’s pretty fun shitting on you. Just because I’m the bigger man doesn’t mean I have to sit back be quiet and listen to your cyber attack.

@TysonGriffin hope this has gained you a few more followers. I’m sure you were reply to my last message. Be quiet for a while and come out with more hatred in a few more months. It’s your pattern. You’re cute, my little pet 😘

Thanks for the hate aka love @JonnyBones we are all one my brother. Just keep trying to be a better role model and focus on being a “Great Champion” No one is perfect but winning and money isn’t everything. You have taught me that 💯🙏🏾

Unsurprisingly, Jones did not echo the same sentiment.

@TysonGriffin last thing, don’t call me brother. My brothers are over 6 feet and champions… Hitting me with that soft shit after getting verbally body bagged. Stop throwing tomatoes from the sidelines bro, you’re whack

Damn. Even when he’s feuding on Twitter, Jones is an absolute monster. Feel free to sit the next few rounds out, Tyson.